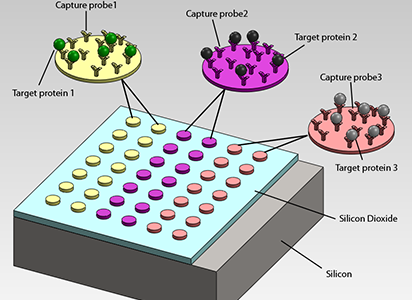 4. The method of claim 1, further containing associating the measured signal pattern to the target probe.

Background
The determination of target nucleic acids has many critical applications in pharmaceuticals and environment monitoring. To provide consistency, speed, and specificity in measuring multiple target polynucleotides, various multiplexing techniques have been developed in which detection is implemented in a single reaction. Multiplexing approaches on the strength of microarrays and microbeads that combine powerful nucleic acid amplification strategies with the  massive screening capability to provide high throughput capacity along with high level of consistency, sensitivity, and specificity.

Microarrays and microbeads are particularly suitable for detecting single nucleotide polymorphisms, which represents one of the largest sources of diversity of organisms. Some single nucleotide variations are directly related to phenotypic traits of interest, such as disease susceptibility. However, most single nucleotide polymorphisms are neutral. But because most biological processes involve the interaction of numerous genes, even neutral sequence variations served as useful markers in linkage maps for researching phenotypes having an underlying multigenic basis. The rising number of SNPs, for example the SNP database maintained by NCBI, provide a rich resource for genetic analysis on the basis of sequence polymorphisms.

In the view of the foregoing, it is desirable to have alternative techniques for detecting nucleic acids, where the detection technique is less susceptible to variation in amplification efficiency, displays a high level of sensitivity, and is adaptable for multiplexing reactions to detect SNPs.

NCBI: Short for the National Center for Biotechnology Information, the NCBI was established on November 4, 1988, as a division of the National Library of Medicine (NLM) at the National Institutes of Health (NIH). As a national resource for molecular biological information, the mission of NCBI is to develop new information technologies to assist in the understanding of fundamental molecular and genetic processes that control health and disease.