With decades of experience in the fields of genomics sequencing, CD Genomics is devoted to providing unprecedented amounts of microbial metatranscriptomic data. Our strong expertise in the informative and unbiased metatranscriptomic sequencing service is guaranteed by state-of-the-art high throughput sequencers, flexible sequencing strategies, and professional bioinformatics pipelines.

The Introduction of Metatranscriptomic Sequencing

While metagenomics shows us the microbial species present in the community and their genomic potentials, metatranscriptomics presents the function and activity of the complete set of transcripts, as well as community structure. Metatranscriptomics offers a more informative perspective compared with metagenomics in revealing active biochemical functions, which has become a focus for applications in the environmental, medical, and energy fields as well as the field of drug discovery.

Our highly experienced expert team executes quality management following every procedure to ensure confident and unbiased results. The general workflow for metatranscriptomic sequencing is outlined below. After RNA isolation from qualified samples, rRNA depletion, library construction, high-throughput sequencing, and bioinformatics analysis are in turn performed. We can help you make decisions on the library construction method, the depth of coverage, and the data analysis strategies based on your research aims. 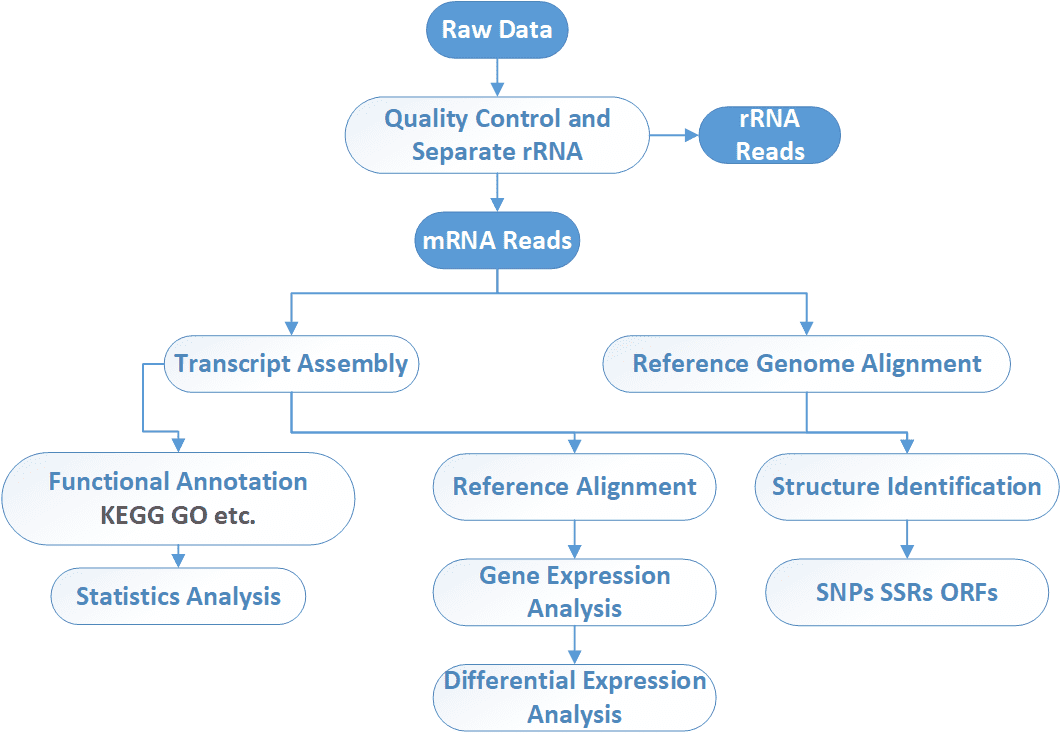 CD Genomics provides full metatranscriptomic sequencing service package including sample standardization, library construction, Hiseq sequencing, raw data alignment, down-stream bioinformatics processing and statistical analysis. We can tailor this pipeline to your research interest. If you have additional requirements or questions, please feel free to contact us, our specialists are more than happy to assist you.

1. What are the noteworthy issues of RNA samples?

The contamination should be rigorously excluded when sampling. In detail, sampling-related instruments and consumables should be sterilized and RNase-free. The freshly obtained samples should be immediately frozen by putting into liquid nitrogen, or directly submitting original environmental or clinical samples to us. The recommended total RNA amount for submission is 6 µg or more with a concentration of greater than 50 ng/µl.

2. What kind of QC methods do you adopt for the customer's samples?

We will perform QC on your total RNA samples prior to sequencing them. We use the Agilent Bioanalyzer to determine the RNA Integrity Number (RIN). If the RIN is lower than 8, the samples will not pass QC. The library QC will also be performed using the Agilent Bioanalyzer to determine library size and purity. Also, prior to loading the libraries on the sequencer, we perform qPCR quantification. The cost for this is included in the sequencing service. The raw data will pass our Q30 filter, which means more than 80% of bases with a greater than Q30 quality score.

3. What are the advantages of metatranscriptomics?

Metatranscriptomics is the genomic analysis of complete microbial transcriptomes, providing a particularly rich source of data on the global diversity of RNA viruses and their evolutionary history. Metatranscriptomics has several advantages over traditional methods such as cell culture, consensus PCR, and metagenomics approaches based on viral particle purification.

Metatranscriptomics has proven successful in characterizing the RNA viromes of diverse invertebrates. Specifically: (i) it uncovers the entire RNA virome, with sufficient coverage to assembly complete viral genomes, including those from co-infecting parasites; (ii) it offers a reliable quantification and assessment of both viral and host RNAs; (iii) it is comparatively simple, requiring minimal sample processing; and (iv) it provides more information than the genome sequence alone, allowing a characterization of viral diversity and ecology.

Mosquitoes harbor a high diversity of RNA viruses, including many that impact human health. Although many efforts to reveal the extent and nature of the mosquito virome, little is known about how these viruses persist, spread, and interact with both their hosts and other microbes. To infer features of virome ecology among mosquito species from different geographic locations, the authors characterized the total transcriptome of 12 populations.

Blast analyses showed the complete genomes of 24 RNA viruses species, of which 19 were newly described here. For each library, the number of virus species varied from 1 to 10 (Table 1). 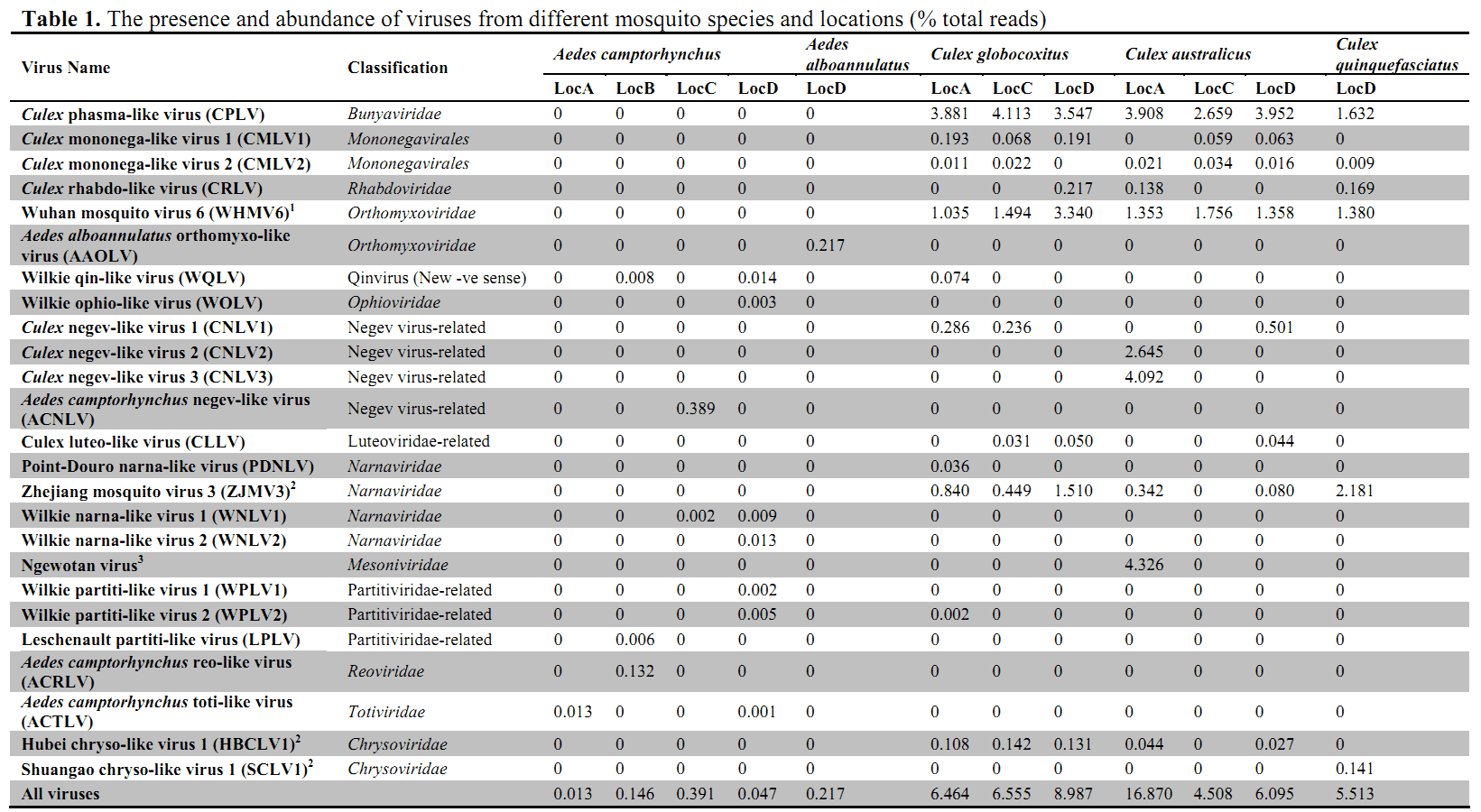 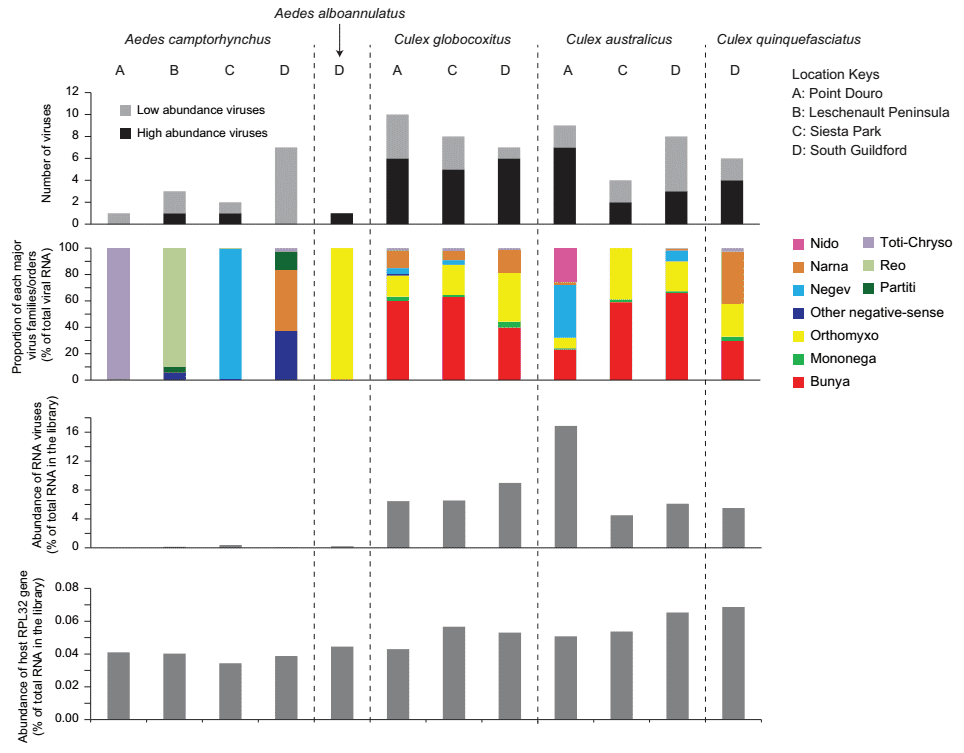 Figure 1. An overview of the diversity and abundance of the RNA viruses discovered.

Figure 2. The similarity of viromes between host species (A) and geographic locations (B).

Figure 3. The matching tree topologies of the Wilkie qin-like viruses and a group of fungi (cox 1 gene) discovered in three mosquito pools.