CD Genomics is offering reduced representation bisulfite sequencing (RRBS) service at single-nucleotide resolution by reducing the amount of sequencing required while capturing the majority of promoters and other relevant genomic regions. RRBS is favorable for biomarker discovery by the identification and analysis of differentially methylated regions (DMRs) between samples.

The Introduction of RRBS

DNA methylation of cytosine is an epigenetic modification involved in gene expression regulation. DNA methylation occurs predominantly in CpG contexts, and these CpG di-nucleotides are more abundant in selected regions of the genome. RRBS is a powerful approach to genome-wide DNA methylation analysis that combines restriction enzyme digestion with bisulfite sequencing to enrich a CpG-dense fraction of the genome. This combination makes RRBS improve the efficiency of the utilization of samples and the perfect platform for pilot studies and clinical applications.

RRBS only sequences the fragments pertaining to CpG-rich regions at a significantly reduced cost when compared with whole genome bisulfite sequencing (WGBS). RRBS is very cost-effective, given that about 1-5% of the genome is sequencing, covering about 12% of genome-wide CpG sites and about 84% of CpG islands in promoters. Plants exhibit a different CpG distribution: (i) lacking characteristic CpG islands in promoters; (ii) occurring at cytosine bases within all sequence contexts. Therefore, while enzyme MspI is commonly used in animals and human, enzyme SacI/MseI is often used in plants.

The general workflow for RRBS sequencing is outlined below. RRBS utilizes the MspI restriction enzyme to cut at CCGG sites across the genome, enriching CpG-dense regions. The regions containing CpGs are then recovered by gel purification. After methylated adaptor ligation, end repair and dA tailing, theses fragments are then converted by bisulfite, amplified, and sequenced. Our highly experienced expert team executes quality management, following every procedure to ensure confident and unbiased results.

By combining enzyme digestion, bisulfite conversion and NGS technology, CD Genomics is able to provide RRBS as an alternative way to generate and profile genome-wide methylomes at a reduced cost. If you have additional requirements or questions, please feel free to contact us.

1. What is the workflow for RRSB?

The workflow of RRBS is demonstrated in Figure 1 below. Briefly, the DNA is first digested, typically with MspI which is methylation insensitive and cuts at CCGG sites, enriching CpG rich regions of the genome. The fragment ends are then repaired and dA-tailed and adapters are ligated. Subsequently, the fragments are selected by size, converted by bisulfite, amplified and sequenced.

Figure 1. The schematic workflow for RRBS.

2. What are the requirements for sequencing samples？

You can submit cells (at least 5*106), fresh tissues (at least 2~3 g), or DNA (at least 5 μg; concentration ≥ 100 ng/µl; OD = 1.8~2.0; without degradation or RNA contamination or severe degradation). Before shipping, the cells should be stored at -80°C, and the DNA should be dissolved in water and stored at -20°C. Please avoid repeated freeze-thaw cycles. When shipping, the samples should be sealed with parafilm and kept in a frozen state probably with ice packs.

3. What species are suitable for whole genome bisulfite sequencing?

The species subjected to RRBS should meet three requirements: (i) eukaryotes; (ii) its reference genome has been assembled to the scaffold level at least; (iii) relatively complete genome annotations.

The authors profiled DNA methylation in genomic DNA extracted from female N. vitripennis kept in either long- or short-day conditions by utilizing RRBS. CpG methylation accounts for a large amount of overlap between the two samples in contrast to other sequence contexts (Figure 1B), which may suggest that non-CpG methylation largely represents experimental noise. CpGs seem to be either heavily or lightly methylated (Figure 1C). The majority of the methylated CpGs were located in exons, and the majority were located in introns, promoter regions and intergenic regions (Figure 1D, E). 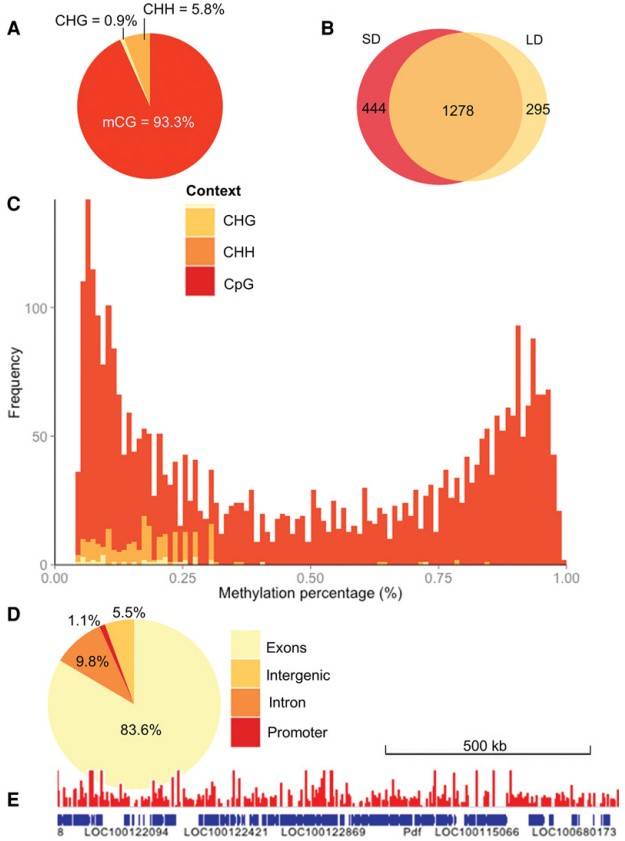 The authors identified 51 differentially methylated CpG sites (DMCs) that were mapped to 37 genes. Approximately half of the DMCs (23/51) exhibited hypomethylation in long day compared with short day, whereas the others exhibited the opposite trend. qPCRs were conducted to validate the RRBS analysis. 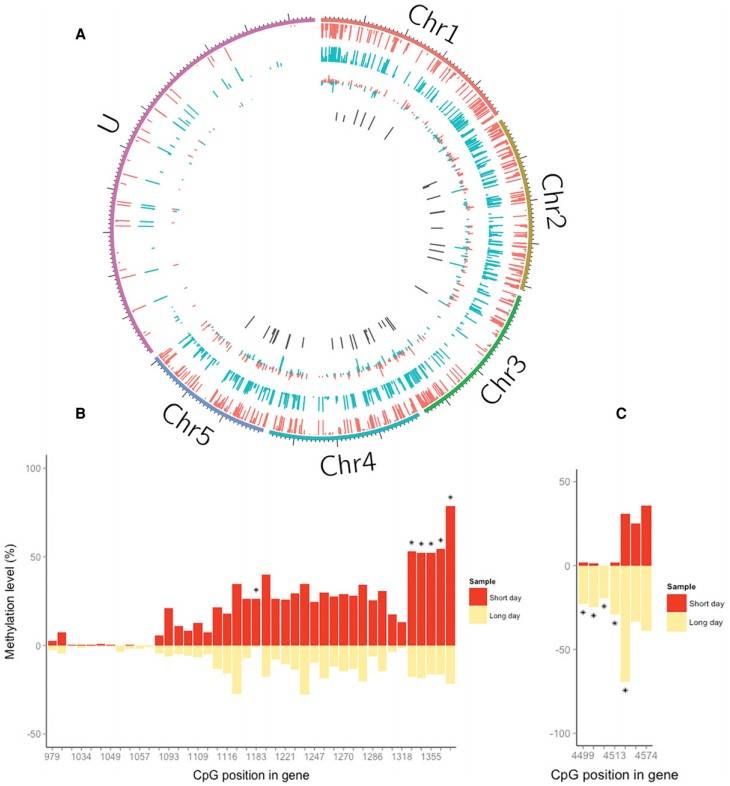 The authors knocked down Dnmt1a-c and Dnmt3 by injecting dsRNA into female pupae of the N. vitripennis strain AsymC. The knockdown was verified by qPCR. Knockdown of Dnmt1a led to females producing diapause offspring regardless of day length. Silencing Dnmt3 resulted a nonsignificant (but close to significance) difference in diapause response, suggesting that the effect of Dnmt3 is much weaker or harder to resolve.

They also tested the impact of DNA methylation pharmacologically by utilizing DNA methylation inhibitor 5-aza-2’-deoxy-cytidine (5-aza-dC), and observed a reduction of diapause in the progeny of wasps maintained in short day, as well as an increase in long-day progeny.