The Brief Introduction of Sequencing History: Sequencing in 21st Century

As we already have a general view on the early stage of DNA Sequencing, It’s time to start the stage of rapid development in 21st century. This is a period from quantitative changes to qualitative changes, not only for the sequencing technology, but also for the application of it. The development of DNA Sequencing is reflected in two aspects. One aspect is that more genes were sequenced, and another is the development of sequencing technology and platform, such as the next generation sequencing and Hiseq 2500 form Illumina company. 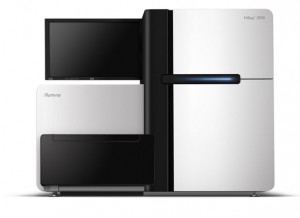 (HiSeq 2500 Sequencing)
The Development of Target
In 21st century, more kinds of genes were sequenced, this contributes a lot to the application of genomic sequencing in many other fields. In 2000, the beginning of this century, the plant genes sequenced by scientist for the first time, which is the Arabidopsis thaliana. The whole gene sequence was published in Nature in December 4th. This became a historic moment of plant genetics, and it also provided a new idea for agricultural science. 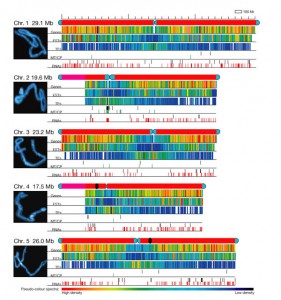 （Nature 408, 796-815(14 December 2000)
The next year, the sketch of Human genome sequencing was published in Nature, and in 2004, the part for euchromatin was completed. It was published in Nature.
The last chromosome gene was sequenced in 2006 by scientists from the United Kindom and United States. This was a symbol of the end for the sixteen-year journey of human genome sequencing. It means that scientists finally have the power to analysis all kinds of genes of human beings and the relationship between genes and diseases.
In 2008, the first genetic map of Chinese was finished, and it was also the first genetic map of Asian. At the same time, the first genetic map of female and the first map of cancer were also completed.
The Development of Technology
2005 is a transitional year for seqeuncing, for the emergence of the high-throughput sequencing. The symbolic event is the coming of Genome sequencer 20 system. It stands for the time of second-generation sequencing. The output of this genome sequencer is 20,000,000 per day. Then Illumia announced it’s Solexa technology and ABI introduced it’s SOLID technology. The second-generation sequencing is more accurate, and the most important thing is the cost of sequencing is reduced. That means the cost of DNA research is more affordable. Besides, the second-generation sequencing can sequence genes in less time. This makes a leap for genomic research, and a rapid development of DNA Sequencing in a short time. Lowing the cost of sequencing is a trend of DNA Sequencing. In 1995, the cost of an automatic sequencer was one dollar for a base. And this decreased to ten cents in 1998 with ABI Prism 3700 DNA Analyzer. Later HiSeq X Ten System broke the $1000 barrier. I belive it will be more affordable for DNA Sequencing in the future.
The Heliscope Single Molecule Sequencer of Helicos, SMART technology from Parcific Bioscience and single-moleculenanopore DNA sequencing of Nanopore was the symbol of the third-generation sequencing. The characteristic which distinguished from the second-generation is the single-moleculenanopore DNA sequencing. And the common advantage of the second-generation sequencing and the third-generation sequencing is high-throughput.
The Future of DNA Sequencing
From the emergence of the genomic sequencing to now just several decades passed. And what it has reached is beyound imagnation. It is hard to allege what it would be in the next two decades. The only thing we know about is that this technology is changing the world.