As a leading provider of NGS services and a partner of Illumina, CD Genomics is dedicated to providing a portfolio of solutions for epigenetic studies. Characterized by small sample size requirements, high-resolution, efficiency and economy, targeted bisulfite sequencing serves as a viable tool for methylation status analysis of targeted genomic regions. With over 10 years of professional experience, we can totally meet your project requirements and budgets in the exploration of methylome.

The Introduction of Targeted Bisulfite Sequencing

DNA methylation, happens most commonly at cytosines in the CpG sites, plays an important role in gene expression and regulation. The ability to detect and evaluate DNA methylation precisely and efficiently contributes to improving our understanding of DNA methylation in development and disease. While whole genome bisulfite sequencing identifies methylated cytosines on a whole-genome scale, targeted bisulfite sequencing is an accurate, efficient and economical technology for DNA methylation analysis of target regions, which may include a hybridization-based step on platforms containing pre-designed oligos that capture the CpG islands, gene promoters and other significant methylated regions, or a PCR-based step to amplify multiple bisulfite-converted DNA regions in a single reaction. There are commercially designed capture libraries available with a range of epigenetic features that cover about 12% to 24% or so of all genome CpGs. In addition, specific primers are designed to capture the region of interest and evaluate site-specific DNA methylation changes.

Our highly experienced expert team and strict quality control following every procedure ensure the comprehensive and accurate results. In the process of targeted bisulfite sequencing, the genomic DNA is bisulfite converted and multiplex amplified using specific designed and validated primers or probes, the amplicons are pooled through barcoding and adapterization. The amplicon libraries are then subjected to sequencing with Illumina HiSeq platforms.

1. When you should choose targeted bisulfite sequencing?

2. What are the advantages of targeted bisulfite sequencing as compared to other technologies of methylation sequencing?

3. How to design proper probes or primers?

A successful application of targeted bisulfite sequencing largely depends on the proper design of probes and primers. There are a lot of effective tools for generating probes or primers in an automatic fashion, such as ppDesigner (http://genome-tech.ucsd.edu/public/Gen2_BSPP/ppDesigner/ppDesigner.php) and PRIMEGENSw3 (http://primegens.org). After obtaining many probes candidates or primers candidates, the validation process is important for selecting the most optimal ones.

4. What is the workflow of targeted bisulfite sequencing?

The workflow of PCR-based targeted bisulfite sequencing is depicted in Figure 1. As for hybridization-based targeted bisulfite sequencing, it can be performed either by bisulfite conversion of hybrid-selected native DNA or by hybrid selection of converted DNA. And the latter approach is now commercially available, which is characterized by superior target specificity, lower DNA-input requirements, and the ability to distinguish a C to U bisulfite conversion from a C to T SNP. 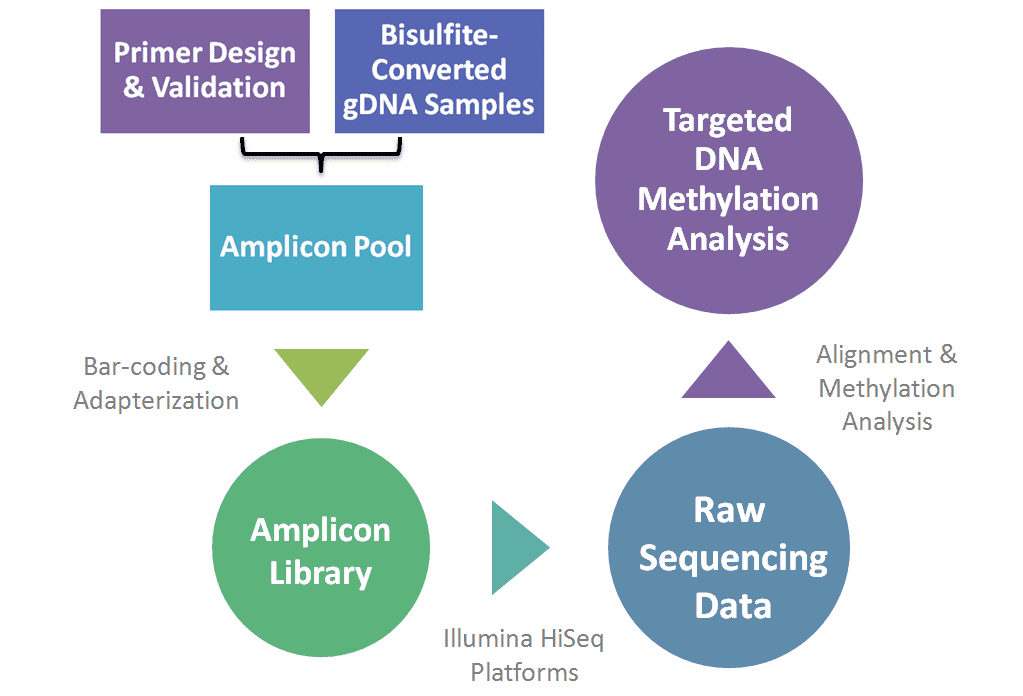 Environmental and genetic factors play crucial roles in Parkinson disease etiology. For now, we have understood that a number of environmental toxins facilitate parkinsonism in humans and animals. Nevertheless, we have no idea about the potential interaction between genetics environment and genetics in Parkinson pathogenesis. Therefore, Zhang et al. apply both targeted bisulfite sequencing and immunohistochemistry methods to study the underlying links.

They designed a set of approximately 97,000 padlock probes covering 16,379 validated tissue differential methylation regions (T-DMRs), all known and predicted human imprinted genes and the transcription start sites of all genes on the X chromosome. K-mean clustering analysis yielded 336 non-overlapping DMRs, among which were mapped to known genes. And the majority of these regions (230/233) showed elevated levels of methylation in the PD brain tissues compared to healthy donors. There is a significant enrichment of genes involved in Wnt signaling and neurogenesis. 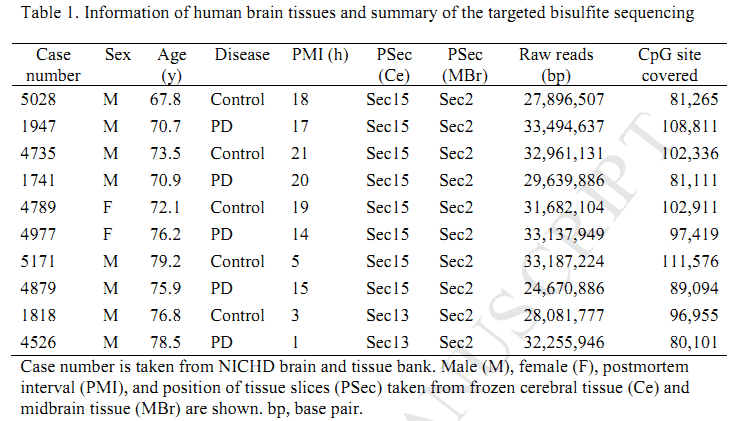 2. Reduced detection of genes in Wnt signaling in substantial nigra of PD patients 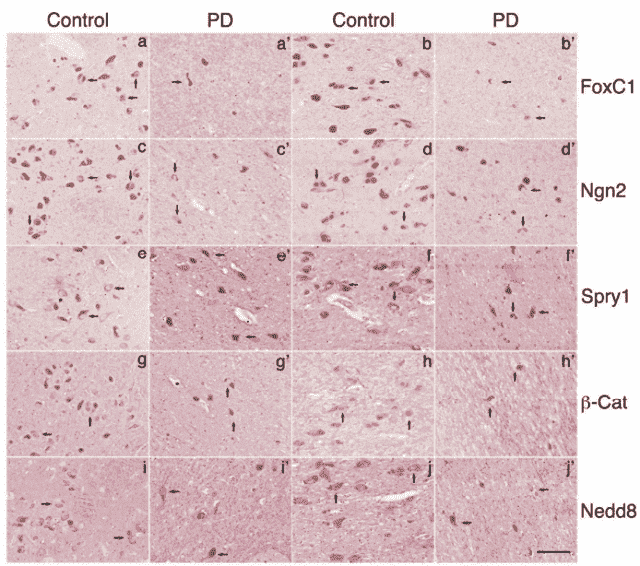 Figure 1. The immunodetection of Foxc1, Ngn2, Spry1, β-Catenin, and Nedd8 in human midbrain. 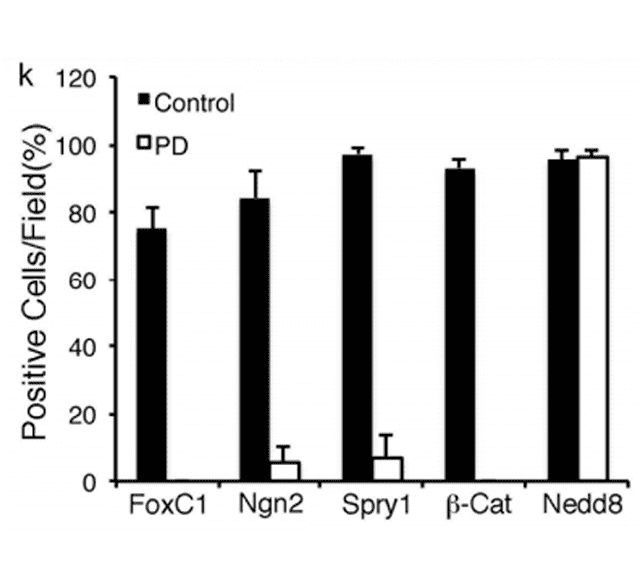 Figure2. Quantitative analysis revealed a significant increase of cells with reduced or no detectable expression of these genes. 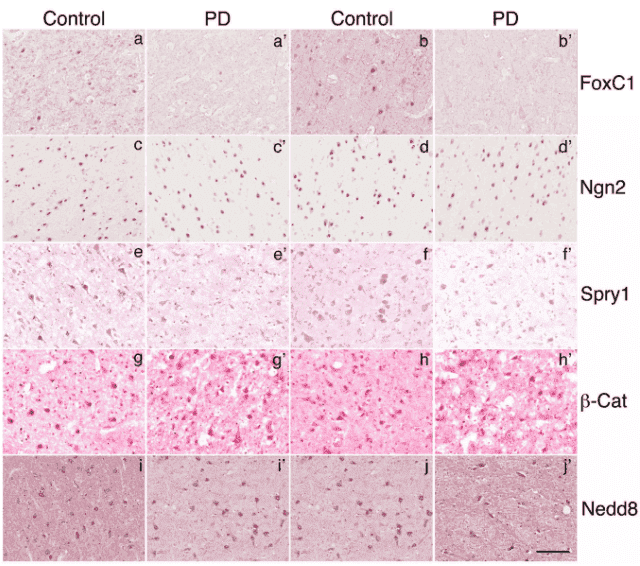 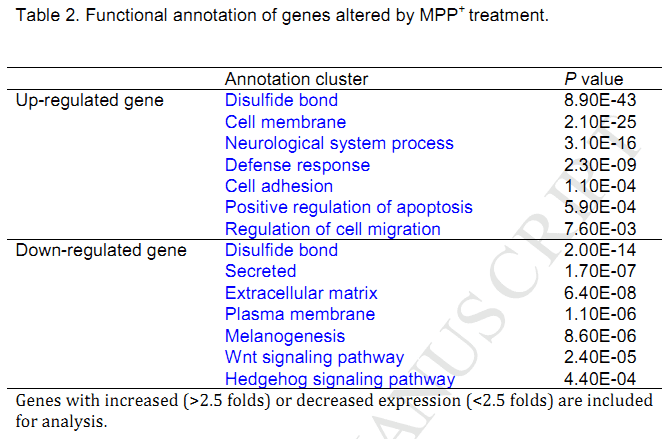