What Is the Difference Between Aerobes and Anaerobes?

What Is the Difference Between Aerobes and Anaerobes?

Microorganisms, specifically bacteria, have been classified into several groups depending on different characteristics such as physical appearance, culture properties, energy and nutrient requirement, biosynthetic capacity, optimal growth temperature, oxygen requirement, among others. One of the classifications used to separate bacteria is oxygen requirement, which divides the lot into two main groups namely the aerobes or the bacterial species that generally require oxygen for growth, and the anaerobes or the bacteria that do not need oxygen for growth.

Oxygen (O2) is an important molecule for the metabolism, growth, and survival of many microbial species and however, some groups cannot survive in the presence of oxygen, while others lie in between these two and considered oxygen tolerant microbes. In biochemical reactions involving oxygen, highly reactive molecules are formed such as hydrogen peroxide and superoxide free radicals which cause harm to the organism. In order to combat the effects of these molecules, bacteria have enzymes that convert free radicals into safer forms of oxygen compounds such as water. Some microbes, aerobes, possess enzymes such as catalase, peroxidase, and superoxide dismutase used in oxygen metabolism. Others, the anaerobes, do not possess enzymes to convert these free radicals thus they cannot survive in the presence of oxygen in the surroundings. 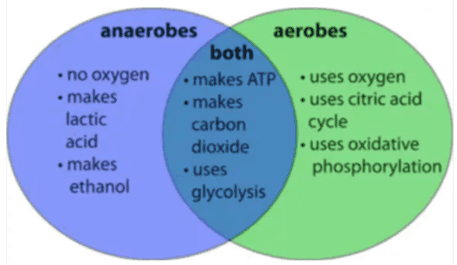 The first group, called the aerobes, are divided into three classes namely the obligate aerobes which require oxygen for their metabolism and biosynthesis mainly for aerobic respiration, facultative aerobes on the other hand do not require oxygen but can grow optimally in its presence, and the last one is the microaerophilic aerobes which use up very minimal amounts of oxygen for its metabolism because they have some oxygen sensitive molecules inside the cell. Aerobic bacteria are capable of utilizing oxygen as a final electron acceptor and converting it to water.

The other group is the anaerobes which are further separated into two classes. Aerotolerant anaerobes are the ones that do not need oxygen but survive even when oxygen is present but they cannot use oxygen in their metabolism. Obligate anaerobes on the other hand will not be able to survive when oxygen is introduced in their environment. Compared to aerobes, anaerobes use other molecules such as carbon dioxide, sulfur, and acetate as a final electron acceptor during energy metabolism.

There are certain biochemical reactions used to classify bacteria based on their oxygen requirement. Redox reaction indicator dyes are usually added to the media in order to determine if an unknown bacterium can utilize oxygen. Resazurin dye is a commonly used dye to demonstrate anaerobic conditions and oxygen utilization, its color changes from blue to pink when reduced, indicating a reaction with oxygen. The intensity of color change is commonly associated with the oxygen requirement of the bacterial species present in the medium. This method is usually done in milk to demonstrate anaerobic conditions in milk.

Some researchers tend to have problems in conducting conventional techniques to determine the oxygen requirement of bacteria because not all species of bacteria can be cultured in the laboratory, while others, specifically some anaerobic bacteria are highly sensitive to the presence of oxygen that it requires stringent techniques to maintain anaerobic conditions. However, with the help of new technologies like sequencing technologies, the determination of oxygen requirement and other biochemical characteristics can be easily accomplished. Whole-genome sequencing provides a holistic view of all the characteristics that an organism possesses. It can be used to know if an organism has genes coding for enzymes used in oxygen metabolism. On the other hand, specific sequencing techniques such as transcriptome sequencing can be used to see the response of bacteria to changes in growth conditions such as variation in oxygen concentration.