The Significance of Skin Microbiota in Health and Research Methods

The Significance of Skin Microbiota in Health and Research Methods

The skin, measuring about 1.8 square meters and known as the largest organ in a human body, is a habitat for millions of bacteria, archaea, fungi, viruses, and small arthropods composing the skin microbiome. It acts as a physical barrier that prevents the invasion of foreign pathogens and provides habitat to commensal microbiota. Skin microorganisms are not only essential in the protecting body against invading pathogens, but also important in educating our immune system and in breaking down natural human products. Skin can support a wide range of microorganisms due to its abundant folds, invagination, and specialized niches.

Variation and Distribution of Skin Microbiota

The variation and distribution of skin microorganisms are affected by many factors such as host genetic and environmental influences. Even the harsh physical condition of skins particularly acidic, desiccated, and nutrient-poor environment influences the skin microorganism composition. Other known factors as seen in Figure 1 are the following: (1) host physiology, (2) immune system, (3) lifestyle, and (4) host's pathobiology or health conditions. 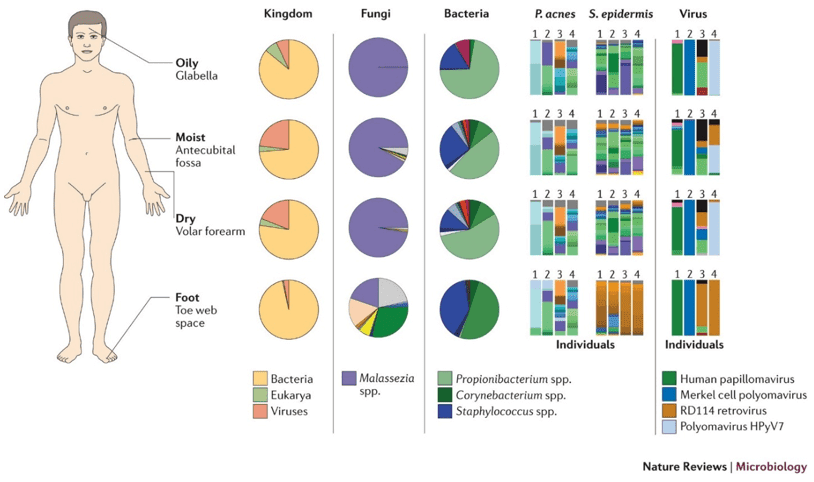 Figure 2 shows the consensus relative abundances of the organisms belonging to three different kingdoms (Bacteria, Eukarya, and Viruses), and of the fungi and bacteria in an adult. Generally, the sebaceous sites have the lowest bacterial diversity where Propionibacterium spp. are the dominant organisms. This suggests that only specific organisms, more likely lipophilic ones, can tolerate the condition in these areas. On the other and, Staphylococcus and Corynebacterium spp. are the dominant microorganisms colonizing the moist areas (navel, side of the groin, behind the knee, inner elbow, and topmost part of the fold between the buttocks) as revealed by metagenomic analysis. This is consistent with the preference of these microorganisms to live in areas with high humidity. The skin sites with the most diverse microorganism are the dry areas (forearm, buttock, and some parts of the hand). In an adult, organisms belonging to three kingdoms (Bacteria, Eukarya, and Viruses), as well as fungi, are common in these areas.

Different researches on skin microbiome aim to understand the skin by (1) explaining the processes involved in the coevolution of host organisms and its diverse collection of microorganisms, (2) characterizing the immune system in association with these organisms, (3) diagnosing illnesses involving pathogenic microorganisms, and (4) exploring the etiologies of different skin diseases.

Previous studies have classified microorganisms in the skin as transient versus resident, collaborators versus adversaries, and beneficial versus pathogenic. Some of the many techniques used to identify distinct groups of microorganisms at different skin sites are culturing and direct sequencing (focusing 16S ribosomal RNA genes of bacteria). Other technologies that may help understand the effects of skin microbiome on skin health and type are the following: (1) whole-genome shotgun sequencing, (2) metagenomics, and (3) functional metabolomics.

The skin microbiome has a great effect on skin health. Naturally, the interactions between the members of the skin microbiota shape the resident microbial community and prevent the entry of pathogenic organisms in the body (known as colonization resistance). However, some pathogenic organisms can outcompete the resident commensal microorganisms, evade the immune system of the host, and later lower the abundance of healthy skin populations. A shift in the normal microbiome, known as dysbiosis, is associated with many different skin diseases. One of the common skin conditions is the acne vulgaris which is caused by the change of the abundance of Propionibacterium acnes, the most abundant microorganisms in the skin of healthy adults. Although most of the time, these skin diseases are polymicrobial diseases that are complex and may involve interactions of many microorganisms.

Applications
The Human Microbiome: Significance and How to Study
How to Characterize "Microbial Markers" in Blood with Next-Generation Sequencing
* For Research Use Only. Not for use in diagnostic procedures or other clinical purposes.