DNA methylation, histone variant, histone modifications, and nucleosome positioning are pathways for epigenetic regulation in eukaryotes. Bacteria, on the other hand, lack histones and nucleosomes; hence, they primarily use DNA methylation as their epigenetic gene regulation. There are three different types of DNA methylation in bacterial genomes: N4-methylcytosine (4mC), N6-methyladenine (6mA), and 5-methylcytosine (5mC). The methyltransferase (MTase) enzyme methylates DNA by transferring a methyl group from S- adenosyl-l- methionine (SAM) on target bases. Only a few sequence motifs in each bacterial genome are targeted by MTases. In Escherichia coli, 5ʹ-GATC-3ʹ is targeted by DNA adenine methylase (Dam) and 5ʹ-CCWGG-3ʹ by DNA- cytosine methyltransferase (Dcm). The large diversity of methylated motifs across the bacterial kingdom resulted from the great variation of the MTase specificity domain.

The detailed sequence targets and roles of most MTases remain unknown which can be attributed to the lack of high-throughput tools and methods for identifying 6mA and 4mC types. While development for methods such as detecting eukaryotic 5mC has relatively flourished, minor advances for methods facilitating the identification of DNA methylation forms in prokaryotic (bacterial) genomes have been made over the same period of time. Recently, new sequencing technologies are beginning to address this problem, as shown in Table 1. Specifically, single-molecule, real-time, or SMRT sequencing has enabled all three major bacterial DNA methylation forms to be identified simultaneously for the first time but in different sensitivities depending on the form of methylation. 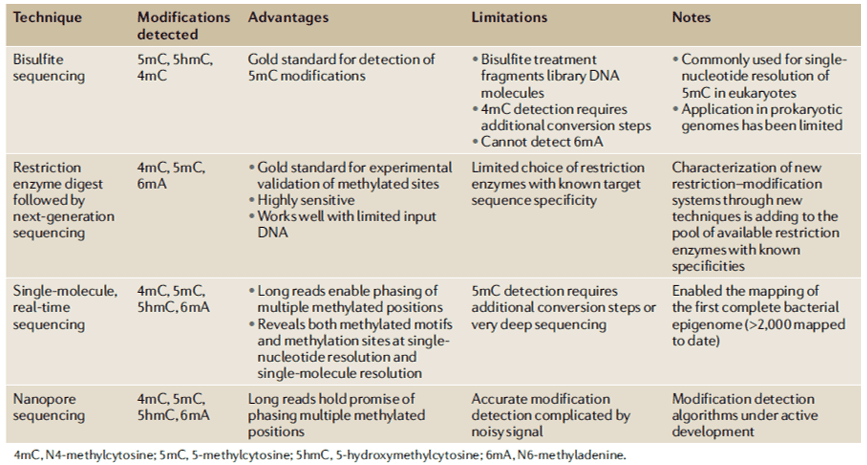 Comprehensive mapping, as detailed in Figure 1, of the bacterial methylome requires the inclusion of motifs and MTases. For all three of the methylation types, occurrences of DNA methylation in bacterial genomes are highly motif-driven. In identifying methylation motifs, it is important to note that most of the time, >95% of motif events are methylated if a motif is targeted by an MTase. For the identification of MTases producing motif methylation, tools for homology search and gene prediction, such as SEQWARE, facilitates the identification of genes having a high probability to encode RM system components such as subunits responsible for restriction, MTase activity, and specificity. RM systems often lead to low transformation efficiencies. As a solution, the effective design of appropriate shuttle vectors must include methylation patterns to provide optimum methylation or reduction of motif sites in the vector that are vulnerable to restriction by the host RM system. 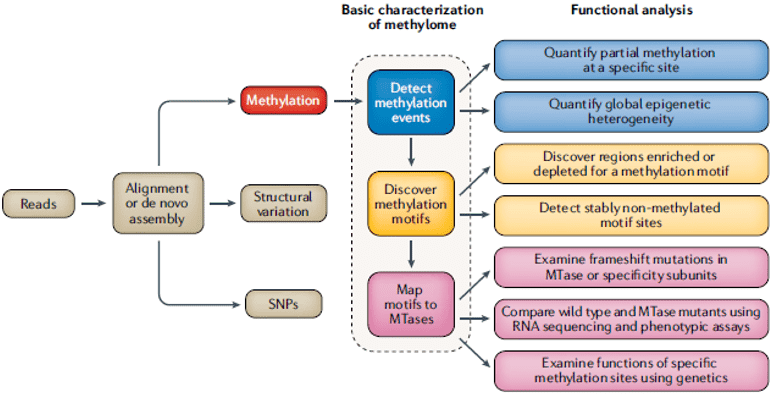 Uncovering the Mystery of Bacterial DNA Phosphorothioation with Long-Read Sequencing Technologies
Blog
* For Research Use Only. Not for use in diagnostic procedures or other clinical purposes.