The Introduction to MeDIP-seq

DNA methylation is an epigenetic mark that plays a crucial role in many biological processes, such as embryonic development, gene regulation and disease genesis. The 5-methylcytosine (5mC) is a common methylated form of the DNA base cytosine. The combination of different pretreatment methods followed by different subsequent molecular biology techniques, such as DNA microarrays and next-generation sequencing (NGS), makes DNA methylation mapping feasible throughout the whole genome. Various NGS-based technologies for detecting DNA methylation have been summarized in Table 1 (Su, 2012).

The workflow of MeDIP-seq is illustrated in Figure 1. It begins with the isolation of methylated DNA fragments by 5mC-specific antibodies via immunoprecipitation. Then the enriched methylated DNA is subjected to DNA purification, library preparation and high-throughput sequencing (Taiwo et al., 2012). 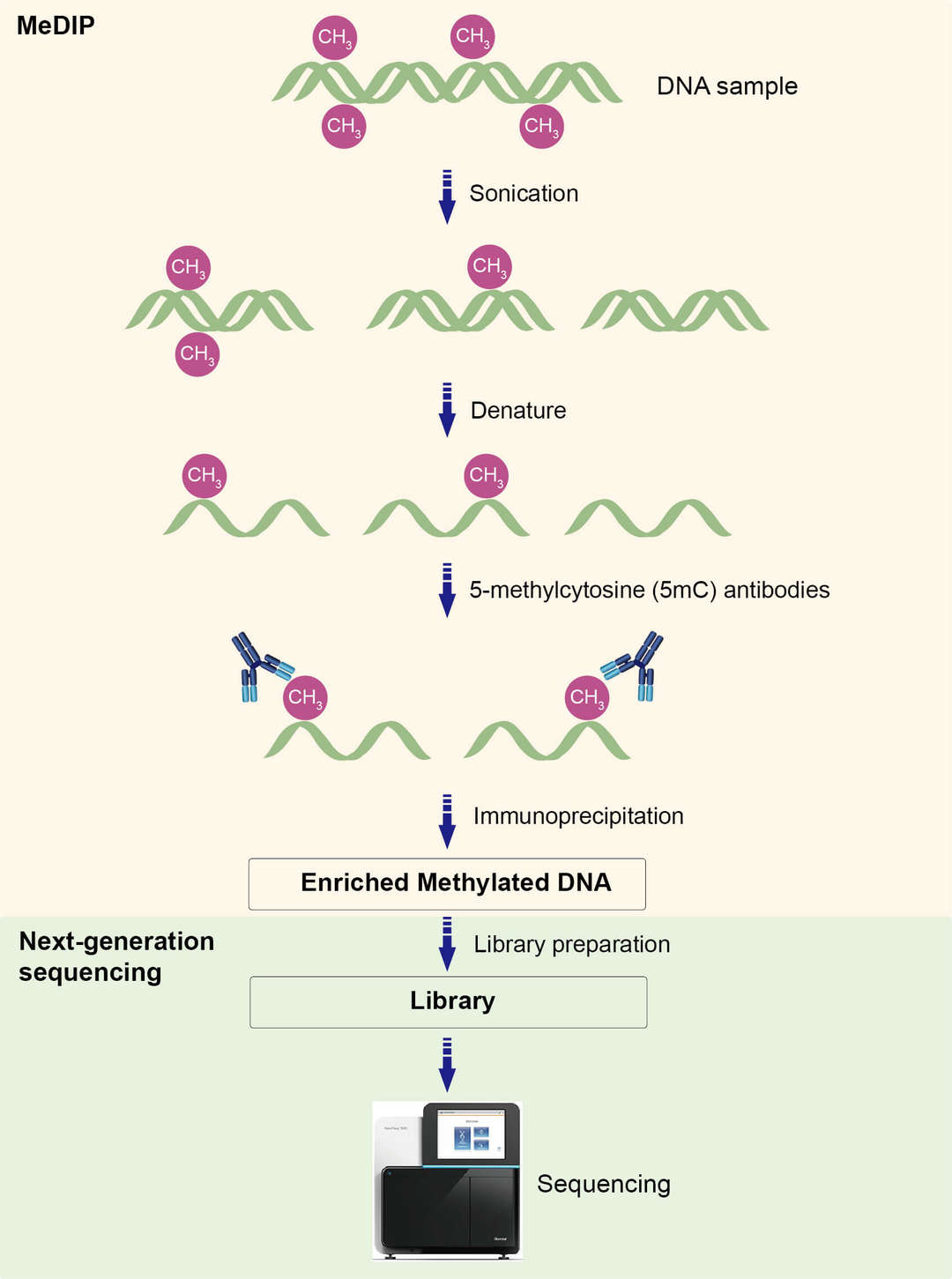 Bioinformatics Pipeline for the Analysis of MeDIP-seq Data

A commonly used bioinformatics pipeline for analysis of MeDIP-seq data is shown in Figure 2. 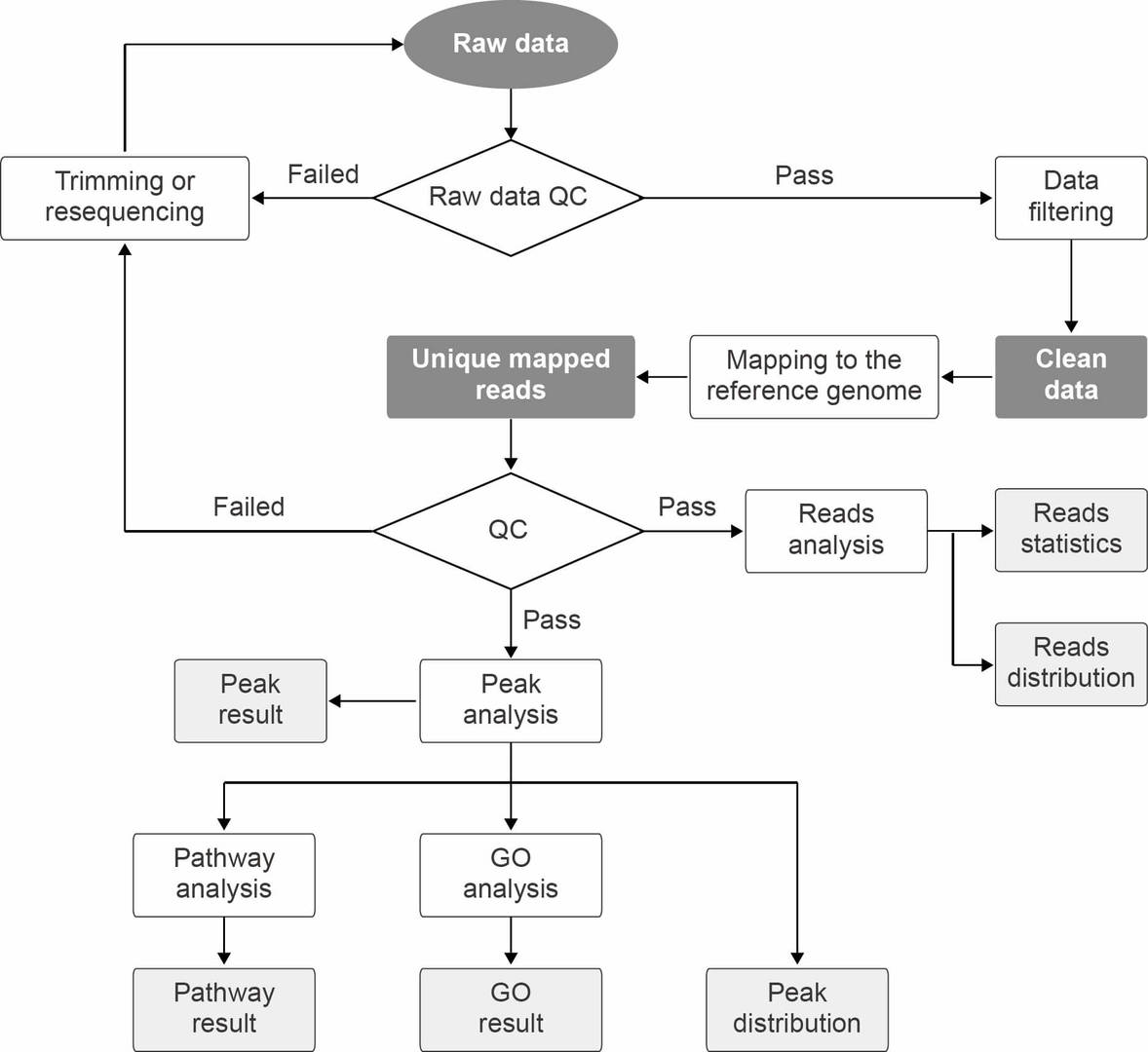 A number of computational tools have been developed for the analysis of MeDIP data, including Batman, MEDIPS, MeDUSA and MeQA (Table 2). The method to be used largely depends on the purpose of the experiment.

Table 2. Examples of software available for the analysis of MeDIP-seq data

Comparison of MeDIP-chip and MeDIP-seq

The purified methylated DNA via MeDIP can be input into high-throughput DNA detection methods such as high-resolution DNA microarrays (MeDIP-chip) or high-throughput sequencing (MeDIP-Seq). The workflow overview of MeDIP-chip and MeDIP-Seq is illustrated in Figure 3. In MeDIP-chip, a fraction of the input DNA and the enriched methylated DNA are labeled with cyanine-5 (Cy5; red) and cyanine-3 (Cy3; green) respectively to identify sequences that show significant differences at hybridization levels, thereby confirming the sequence of interest is enriched. 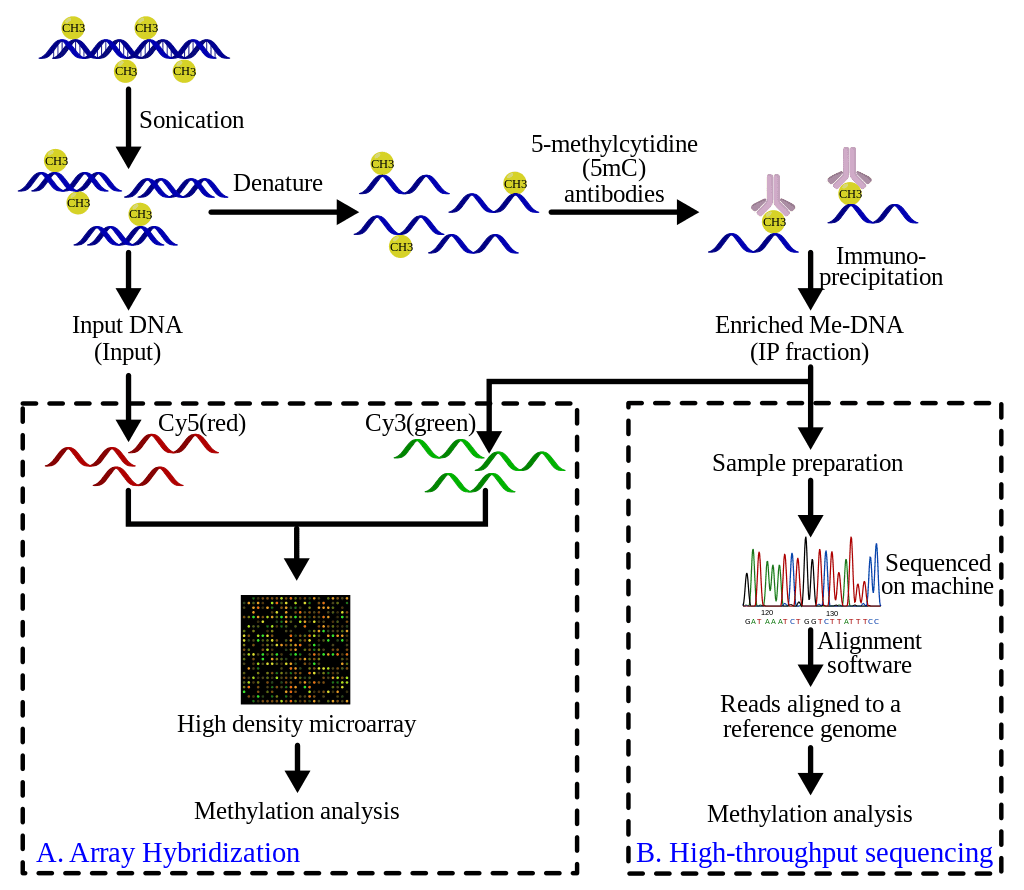 Figure 3. Workflow overview of the MeDIP procedure followed by (A) array-hybridization or (B) high-throughput sequencing (from wiki)

Different DNA methylation analysis approaches have competing strengths and weaknesses. Array-based identification of MeDIP sequences is limited to the array design. As a result, the resolution is restricted to the probes in the array design, whereas the sequence-based identification of MeDIP sequences is generally applicable to any species for which a reference genome exists. A summary of features and potential sources of bias for various techniques is shown in Table 3 (Laird, 2010).

Table 3. Features and sources of bias for various techniques