Microarray is a powerful experimental platform that can simultaneously study the expression of thousands of genes under different experimental conditions. The common microarray techniques include SNP microarray, CGH microarray, gene expression using DNA microarrays, DNA methylation microarray, etc. The overall goal of the microarray data analysis involves the generation of raw expression data and determination of their biological significance. The typical process can be divided into the following steps (Figure 1): pre-processing, differentially expressed genes analysis, class discovery and prediction, as well as annotation.

Different scanning settings can result in different images that may affect the experimental results. Generated pictures are then quantified using packages such as Imagene or GenePix. The intensities are generally measured as either mean or median pixel value in the given region.

The quality assessment starts with visual examination of the images and plots of the raw data. Experienced researchers are able to tell which arrays in the set have inferior quality or whether some regions are unusual due to scratches, etc. Spatial plots can also help identify regions with unusual signal.

An important part of data preprocessing is normalization, which adjusts the individual intensities so as to make comparisons both within an array and between arrays in the experiment. Examples of differences needed to be adjusted are unequal RNA quantities, differences in labeling, and systematic biases.

The most commonly accepted form of adjustment is currently lowess (locally weighted least squares microarray data analysis) (Figure 2). Although this method removes dye and intensity differences, it does not eliminate spatial patterns. For some arrays, such as Agilent arrays, the print tips are not used during manufacturing, so it is hard to divide the array into sub-grids to remove spatial patterns. One alternative in this situation is to use two-dimensional smoothing. 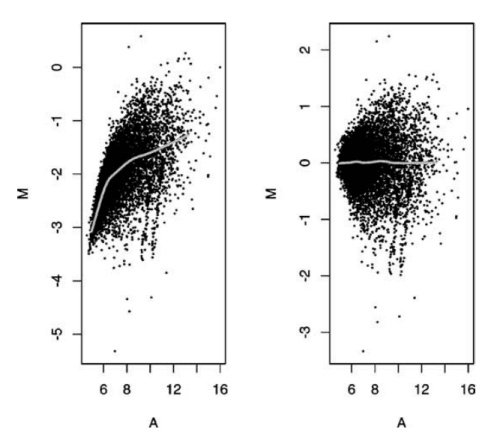 Figure 2. M vs A plots for raw unadjusted data (on left) and after lowess normalization (right) (Corporation H P. 2004).

In order to analyze a group of slides, most statistical methods assume that the slides have equal distributions of intensity levels; otherwise one slide might unfairly influence the results. The easiest way to handle this problem is to scale all the arrays so that they have equal variance, or by adding slide covariates to the model used to analyze the data. (Figure 3). 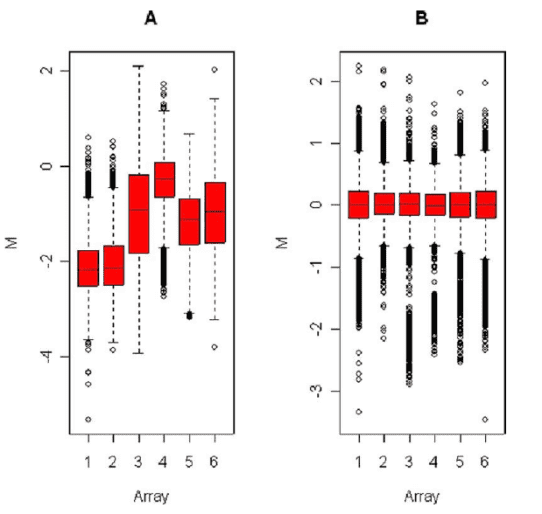 Figure 3. Boxplots showing the distribution of M values in each of 6 arrays hybridized as part of the same experiment, before (left) and after (right) scale normalization (Corporation H P. 2004).

Under both experimental conditions, t-test and Wilcoxon test are common standard test methods for differential expression of genes between two samples. Under two or more experimental conditions, the ANOVA model and the mixed effect model can be effectively applied. The S+ array analyzer includes several methods for two-sample comparisons and multiple sample comparisons, including various types of t-tests and Wilcoxon tests based on both distribution and permutation-based null distributions. Regardless of the test statistics used, multiple comparisons are an important consideration given the number of genes and tests.

Class discovery and prediction studies have implications for tumor classification and personalized. Traditional tumor classification methods are mostly based on morphological analysis, which is not that precise. Microarrays can provide a more reliable tool for identification of subclass by detecting molecular markers.

There is a number of annotation metadata available for any given gene. Examples include Unigene, LocusLink, chromosome number, chromosomal location, KEGG pathway information and Gene Ontology (GO) categorizations. A microarray data set typically involves a set of known identifiers corresponding to the probes/probabilities used. These identifiers are typically unique and can simply be linked to the metadata source so that each probe/question set on the microarray chip is used to find various annotations. Genes are annotated by using some online databases (such as Unigene, LocusLink, GO/Amigo).

Minimal Information About a Microarray Experiment (MIAME) standards describe the minimum information required to interpret microarray data and ensure that results derived from its analysis can be independently verified. The information required includes information such as array platform, experimental design, and sample preparation. MIAME standard is used as a guide to submitting microarray data and method information in many journals, and many journals now require authors to make their data public as a requirement for publication. The MIAME list is available on the Microarray Gene Expression Data (MGED) website.

The Applications of SNP Microarray