CD Genomics has been providing the fast and affordable targeted region sequencing service for decades. We employ the state-of-the-art sequencing instruments to help you obtain full DNA information of the selected targets in a cost-effective manner, which can greatly increase both the breadth and the depth of your genomics research.

The Introduction of Targeted Region Sequencing

The process of targeted region sequencing includes probes/primers designing/synthesis, target regions capture, library construction, paired-end sequencing, and bioinformatics analysis based on target sequences. Specific probe/primer sets are designed to enrich targeted regions using either hybridization or amplification methods. In the hybrid capture method, biotinylated oligonucleotide probes are designed to target regions of interest within a DNA fragment library. After a hybridization incubation, streptavidin-coated magnetic beads are used to capture the biotinylated probe/target hybrids, which results in a library that is highly enriched for the targeted DNA. The current amplification method relies on multiplex PCR or some form of primer extension across regions of interest.

The targeted region sequencing has a wide range of applications, including:

1. What is the difference between whole exome sequencing and targeted region sequencing?

The customer who requires the targeted region service need submit the DNA or tissue samples, as well as the list of gene candidates or the chromosomal localization of your target region. We are responsible for the probes generation, target enrichment, library construction, sequencing, and bioinformatics analysis.

3. How about the turnaround time?

4. How to validate variants? 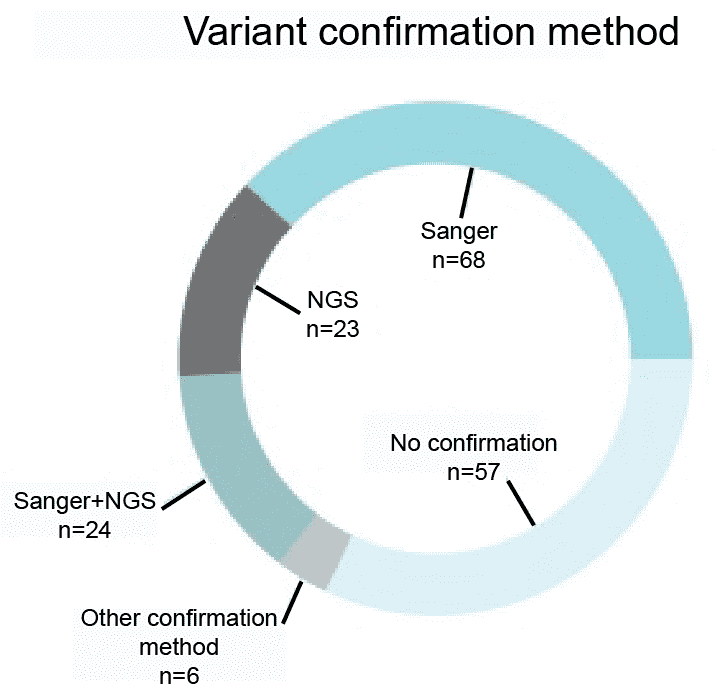 The authors recruited a Chinese family with autosomal dominant congenital cataracts (ADCC). They found a heterozygous missense mutation c.634G>C(p.G212R) substitution in the MIP gene by using target region sequencing. In conclusion, the study presented genetic and functional evidence for this novel mutation, which leads to congenital progressive cortical punctate with or without Y suture. The proband (II:2) had a different type of

The authors investigated a Chinese family (Figure 1), and found that the proband (II:2) showed a punctate cataract, while the other affected members show punctate cortical opacities, combined with Y-sutural cataracts (Figure 2).

Figure 2. Slit lamp photographs of the patients. The proband II:2 (A) showed a punctate cataract, while his younger brother II:6 (B) and the brother’s son III:5 (C) showed a Y-suture cataracts combined with punctate cortical opacities.

A custom-made capture panel was designed to capture 351 genetic eye disease genes that are collected from OMIM (Human Genetics Knowledge for the World) and the published literatures. The authors found four rare variants in both samples (Table 1).

Only the c.634G>C mutation of the MIP gene was a novel heterozygous missense mutation, which changed Glycine to Arginine at the position 212 (p.G212R). And segregation analysis was revealed that the mutation cosegrageted well with all affected participants and was not detected in unaffected members or the 100 normal controls.

PolyPhen-2 and SIFT analysis strongly indicated that the p.G212R mutation is likely to be deleterious to the protein and may be responsible for the congenital cataracts. A multiple sequence alignment showed that the Glycine at position 212 of MIP is highly conserved among various species (Figure 3B). 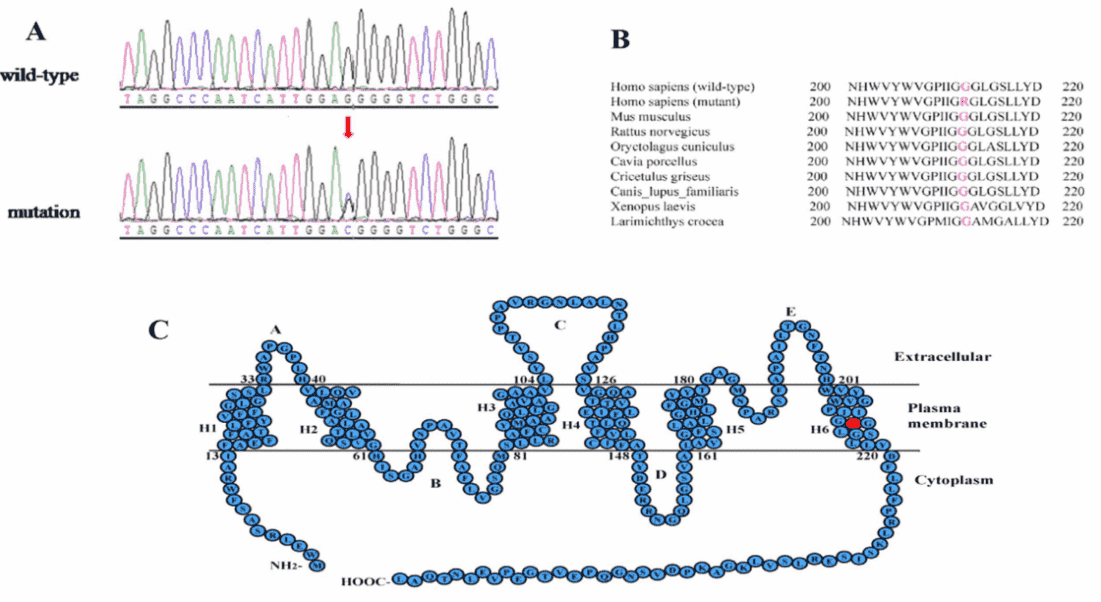 The RT-PCR was used to measure the RNA transcription level of WT-MIP and G212R-MIP, which revealed that a similar relative MIP mRNA expression levels (Figure 4B). Nevertheless, Western blot indicated that the protein expression levels of MIP were significantly reduced in the G212R-MIP cells (Figure 4C) in accord with the results of fluorescence microscopy analysis. 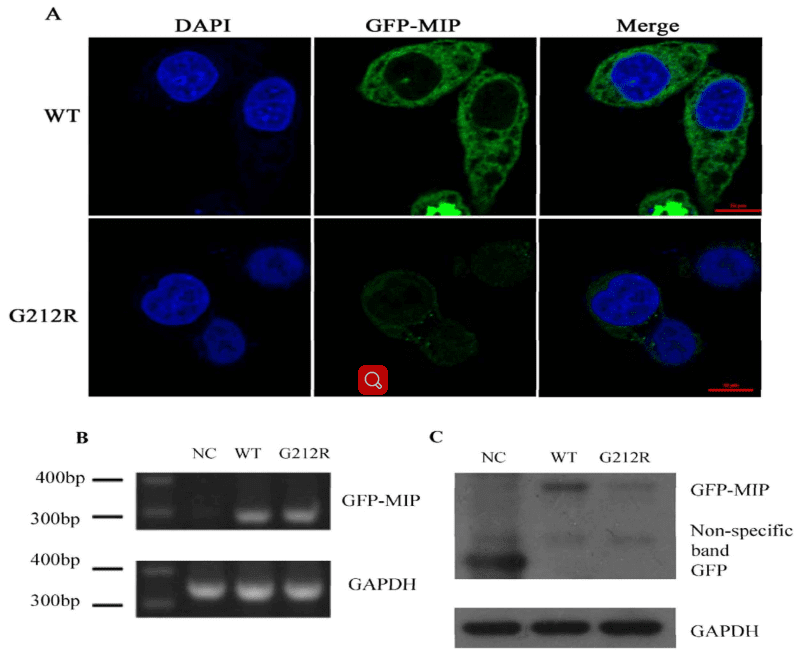 In the present study, the authors suggest that the c.634G>C, G212R substitution may contribute to the pathogenesis of ADCC in this Chinese family.

Target region sequencing is a powerful tool for clinical diagnosis of a heterogeneous group of monogenic disorders due to the compatible performance in capture coverage, the lower cost, and the shorter turnaround time.