CD Genomics has been providing the accurate and affordable RNA-Seq (RNA sequencing) service for decades. We combine both Illumina (short reads) and PacBio (long reads) platforms to obtain the transcriptome that allows de novo assembly or re-sequencing for bacteria, plants, animals and humans.

The Introduction of RNA-Seq

RNA-Seq delivers an unbiased and unprecedented high-resolution view of the global transcriptional landscape, which allows an affordable and accurate approach for gene expression quantification and differential gene expression analysis between multiple groups of samples. RNA-Seq can identify novel and previously-unexpected transcripts without the need for a reference genome, allowing de novo assembly of new transcriptome that is not previously studied before. It also enables the discovery of novel gene structures, alternatively spliced isoforms, gene fusions, SNPs/InDel, and allele-specific expression (ASE).

CD Genomics combines both Illumina HiSeq and PacBio systems to provide a fast and accurate RNA-Seq and bioinformatics analysis for any species. Our highly experienced expert team executes quality management, following every procedure to ensure confident and unbiased results. The general workflow for RNA-Seq is outlined below. 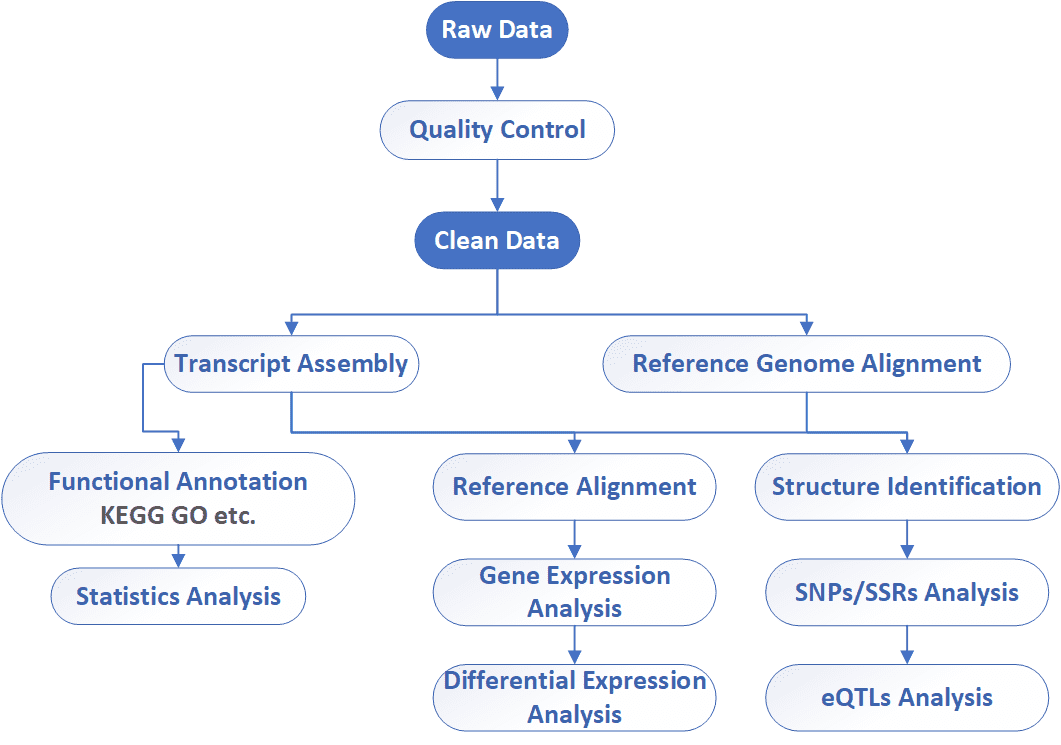 1. How many biological replicates do I need for each condition?

We suggest you to submit at least 3 replicates per sample to increase confidence and reduce experimental error. Note that this only serves as a guideline, and the final number of replicates will be determined by you based on your final experimental conditions.

2. What advantages does NGS have over Microarray?

Various technologies have been developed for transcriptome analysis, such as microarray and NGS. Compared to microarray, NGS has several advantages, including:

i. RNA-Seq is a sensitive tool for gene expression profiling. Compared to microarray, RNA-Seq offers a digital read that is more accurate for all gene expression.

ii. Microarray can only offer limited gene expression information (i.e., the genes incorporated into the chip), whereas NGS is a more comprehensive approach that yields additional information for novel gene variants and low-abundance transcripts.

iii. NGS produces far more reproducible and reliable results than microarray. It is not necessary to conduct qPCR after RNA-Seq, whereas it is a standard procedure for microarray to verify results.

3. When is it necessary to eliminate rRNA before sequencing?

Ribosomal RNA (rRNA) constitutes more than 90% RNA species in total RNA. Performing RNA-Seq without Poly-A enrichment or rRNA depletion will generate reads that mostly come from rRNA. For example, less than one-tenth reads would be useful information. Transcriptome that has been rRNA depleted is often considered as total RNA, including both mRNA and non-coding RNA. Therefore, Poly-A enrichment or rRNA depletion is necessary for any sequencing platform.

4. Can RNA-Seq be conducted in prokaryotic species without available reference genome?

It’s better not. Prokaryotic species generally require reference genome for transcriptome analysis, since the mRNAs in them are usually polycistrons that do not suit for de novo assembly.

5. What is the conventional pipeline for RNA-Seq data analysis? 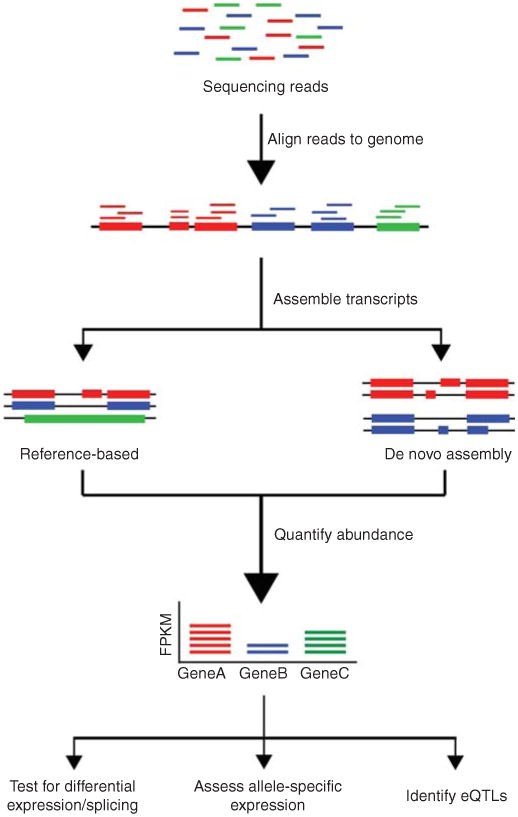 The authors performed deep RNA sequencing in different subpopulations of normal B-lymphocytes and chronic lymphocytic leukemia (CLL) cells from a cohort of 98 patients. They detected thousands of transcriptional elements that were differentially expressed between the CLL and normal B cells or exhibit CLL-specific splicing patterns. They also identified a major molecular and clinical subdivision in CLL.

1. The gene expression landscape of CLL

The authors found 1089 genes differentially expressed between the CLL and normal B cells (Table 1). As was expected, the most differentially expressed genes are immunoglobulins due to the clonality of the CLL cells. Pathway analyses revealed that genes involved in metabolic pathways had higher expression in CLL, while genes related to splicesome, proteasome, and ribosome were substantially down-regulated in CLL.

Table 1. Expression and splicing differences between the different groups analyzed. 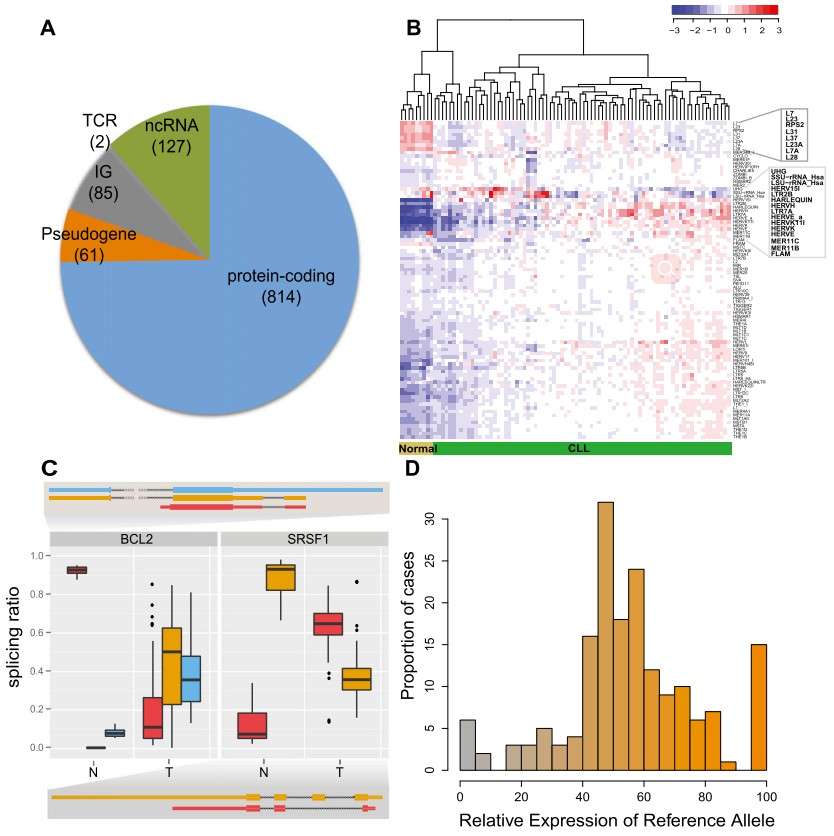 2. The splicing landscape of CLL

The authors identified 2000 genes with significant differences in the relative ratios of alternative splice isoforms between the CLL and normal cells, including genes with well-known alternative isoforms as cancer biomarkers, such as RAC1, CD44, and BCL2L1. Changes in the BCR pathway were identified at expression level and the splicing level (Figure 2). 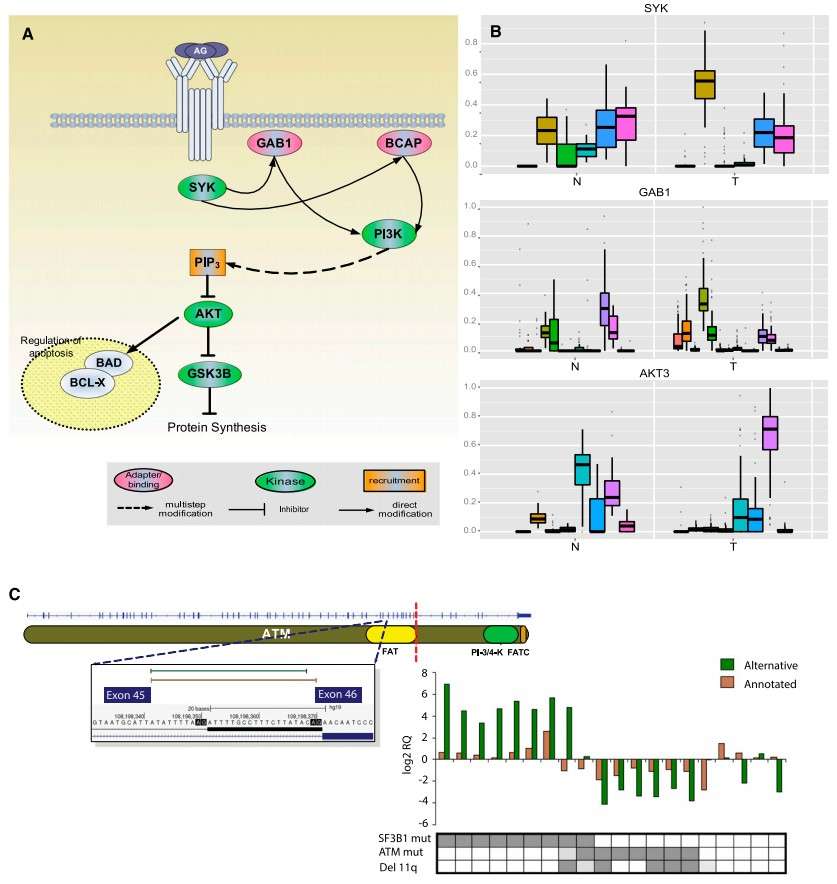 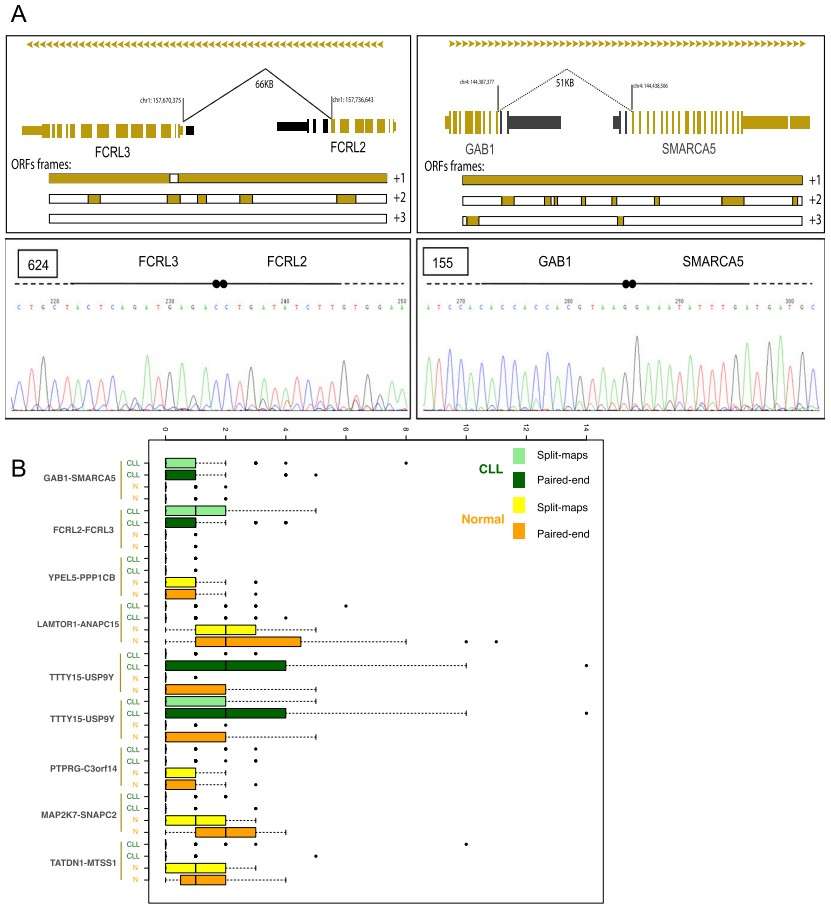 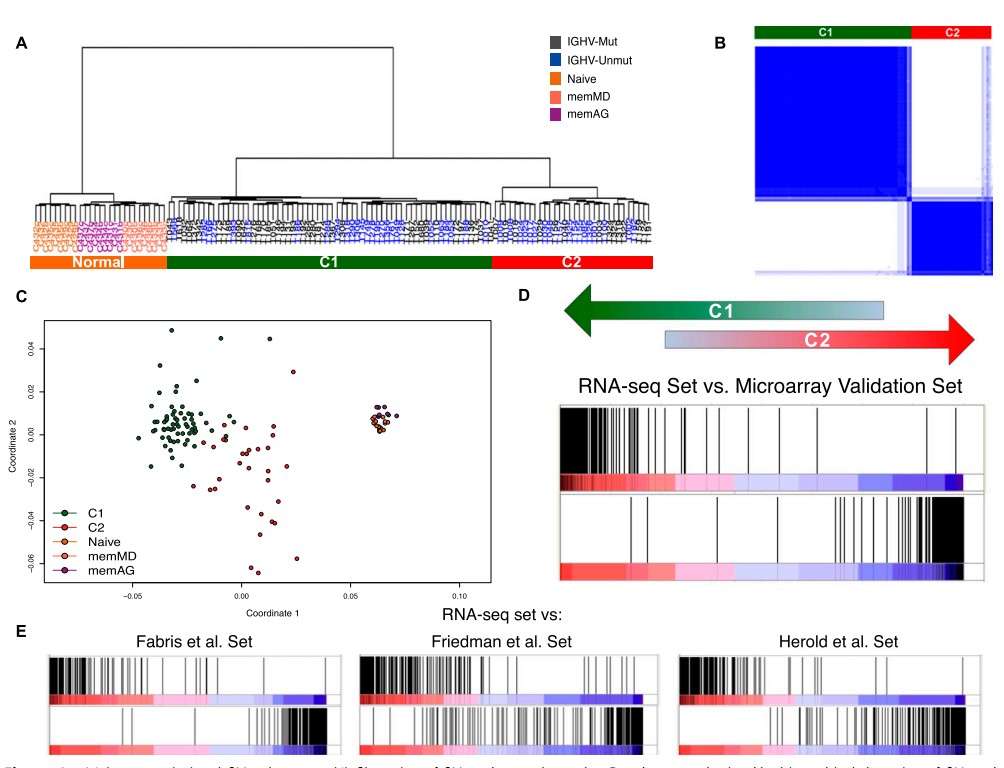 The authors assessed the clinical impact of the C1 and C2 CLL groups. Compared with C1 patients, C2 patients had a higher frequency of mutations in genes related to adverse outcome and were more likely to be in the advanced Binet stage. 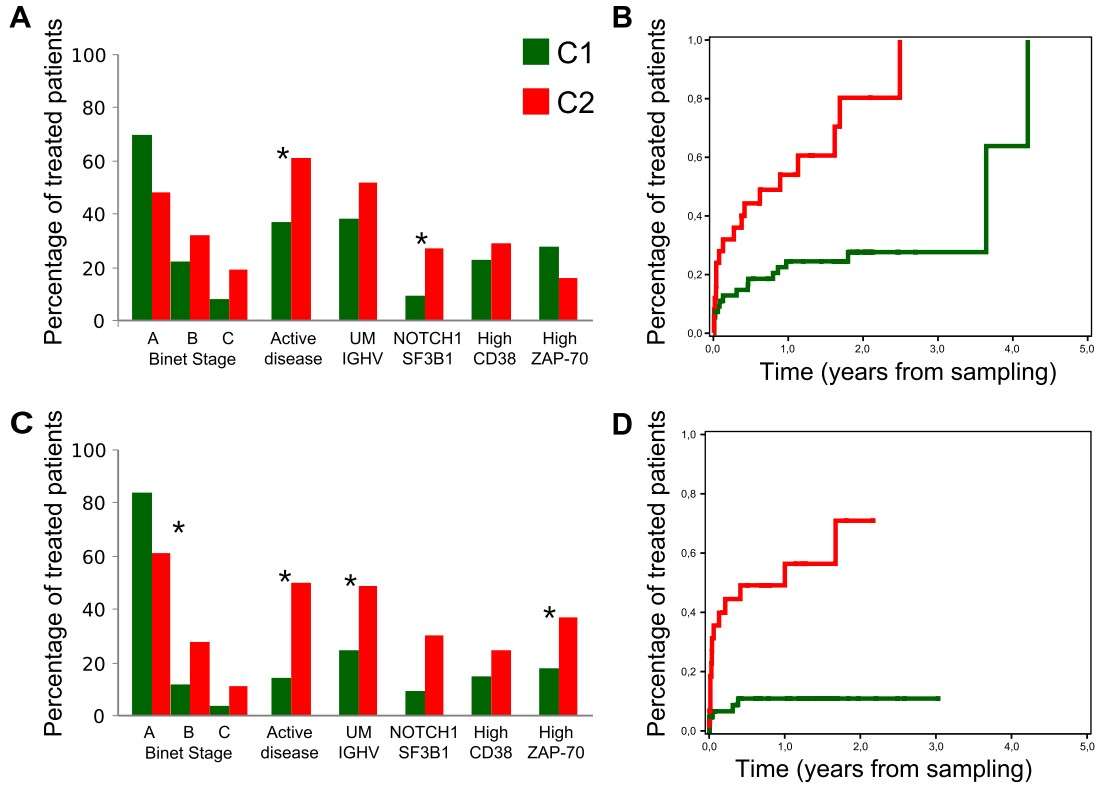 Figure 5. Clinical behavior of the C1 and C2 subgroups.

The Technologies and workflow of RNA-seq