As a leading provider of NGS services, CD Genomics is providing an integrated portfolio of methylation sequencing services. Whole genome bisulfite sequencing (WGBS) is an effective and reliable strategy to identify individually methylated cytosines on a genome-wide scale. With over 10 years of experience and the state-of-the-art next-generation sequencing platforms, we can totally meet your project requirements and budgets in the exploration of methylome.

In mammals, 5-methylcytosine involves the covalent attachment of a methyl group to the 5’ carbon position of cytosine, conferring an additional ability of signaling and regulatory function. As one of the major epigenetic modifications, 5-methylcytosine plays a significant role in many biological processes, including gene silencing, suppression of transposable and repetitive sequences, genomic imprinting, X chromosome inactivation. Detection and quantification of methylation are critical to understanding gene expression and other processes subjected to epigenetic regulation.

Our highly experienced expert team and strict quality control following every procedure ensure the comprehensive and accurate results. Before high-throughput sequencing, the DNA sample is processed with cytosine bisulfite conversion followed by tagging at 5’ and 3’ ends, and the introduction of Illumina adapters by PCR amplification.

Benefiting from the cutting-edge next-generation sequencing platforms and rich experience, we guarantee you high-quality data and integrated bioinformatics analyses. If you are interested in what CD Genomics can do with the whole genome bisulfite sequencing, please do not hesitate to contact us. We look forward to moving your project forward.

1. What species are suited for whole genome bisulfite sequencing?

The species subjected to genome bisulfite sequencing should meet the following three conditions:
a. Eukaryotes.
b. Its reference genome has been assembled to the scaffold level at least.
c. Relatively complete genome annotations.

2. What are the advantages of whole genome bisulfite sequencing?

For studies interested in regions outside of CpG islands, targeted methods such as RRBS and MeDIP are not applicable, and the most proper choice is probably to be WGBS.

3. What are the applications of whole genome bisulfite sequencing?

WGBS Provides insights into cell fate commitment and reprogramming, gene regulation, and the identification of novel epigenetic markers and targets for disease.

WGBS has become the standard approach in some major epigenome consortiums, such as NIH Roadmap (The NIH Roadmap Epigenomics Mapping Consortium), ENCODE (an integrated encyclopedia of DNA elements in the human genome), Blueprint (to decode the epigenetic signature written in blood), and IHEC (International Human Epigenome Consortium).

DNA methylation plays a central role in the regulation of gene activity and chromatin structure in response to environmental conditions. The understanding of genome-wide DNA methylation provides insights into the regulatory mechanisms of abiotic stress response/adaptation. 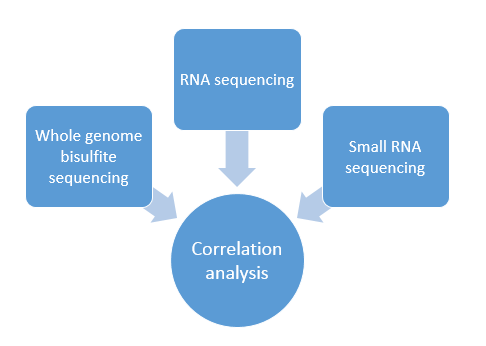 Researchers investigated the differences between the three cultivars in DNA methylation patterns, DMRs (Differentially methylated Regions), and gene expression, and further inquired into the underlying correlations.

The genes proximal to hypermethylated DMRs showed lower levels of transcript abundance (downregulation) compared to all genes. The genes proximal to hypomethylated DMRs exhibited similar or moderately higher levels of transcript abundance (upregulation) relative to entire gene set. DNA methylation appeared to be correlated with on/off status of gene expression too for DMRs (14.5% for N22/IR64 and 7.2% for PK/IR64).

Relationship between differential methylation and transcript abundance of protein-coding genes. 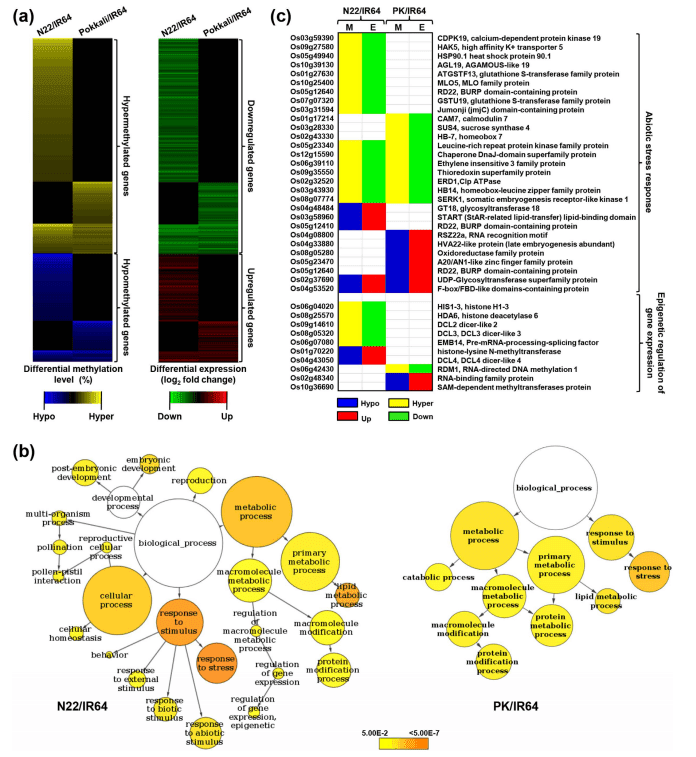 3. Methylation status of TEs is correlated with transcription of proximal protein-coding genes.

Correlation between differential expression and frequency/methylation level of TEs.