Next-generation sequencing has several platforms that enable massive parallel sequencing wherein thousands to millions of fragments of DNA obtained from the same sample are all sequenced at the same time. Such technology facilitates high-throughput sequencing, allowing the sequencing of the entire genome in less than a day. One of the revolutionizing applications of NGS is on the understanding of variants in cancer, as well as their role in cancer progression. As a tool for discovery, NGS has revealed new genetic drivers of cancer which led to the development of targeted cancer therapies, as well as providing a tool for the detection of mutations which is crucial in determining the appropriate therapy for a cancer patient.

Using target sequencing that utilizes NGS, the development of cancer panels, which target hundreds of genomic regions that are hotspots for cancer-causing mutations, was initiated. Such panels target only specific genomic regions for sequencing, which eliminates the large proportion of the entire genome. Targeted sequencing panels, such as cancer panels, aid in the rapid diagnosis of many genetic diseases. Furthermore, the results of targeted sequencing can also be used in therapeutic decision making such cancers where the treatments can be cancer-type specific.

Cancer genomes are said to be harbors of a wide range of mutations. These include multiple-nucleotide variants or MNVs, insertions, deletions, complex variants, single nucleotide variants or SNVs, and more complex structural variants (SVs) including inversions (INVs), insertions, translocations, and duplications (DUPs). Oncogenes, or the genes which have the potential to cause cancer, such as KRAS, BRAF, EGFR, and NRAS usually contain hotspot missense mutations are the focus of most variant callers. These variant callers are designed to call mutations such as SNV and small insertions/deletions (InDels). Although, variant callers sometimes fail to detect complex mutations including large frameshift insertions and deletions which are commonly present in tumor suppressors such as PTEN, RB1, NF1, TP53, BRCA1, BRCA2, and STK11.

For the past years, a lot of NGS-based studies were conducted to have a comprehensive molecular characterization of cancers. The goal to identify novel genetic alterations contributing to oncogenesis, as well as to cancer progression and metastasis. Also, they aim to study tumor complexity, heterogeneity, and evolution. Some of the successfully characterized cancers include breast cancer, colorectal cancer, lung cancer, ovarian cancer, acute myeloid leukemia or AML, liver cancer, melanoma, and head and neck cancer. 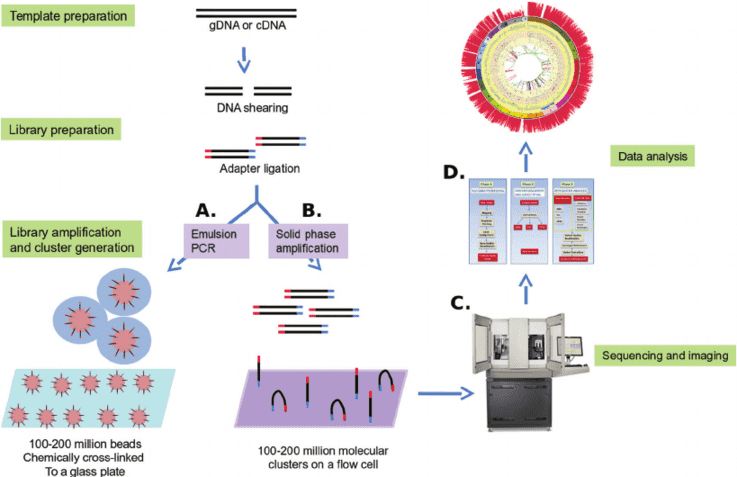 This initial step has two parts. First is building a library of nucleic acid (DNA or complementary DNA (cDNA)). The second is the amplification of that library. Sequencing libraries are created by fragmenting the DNA or complementary DNA sample and ligating adapter sequences, or the synthetic oligonucleotides of a known sequence, onto the ends of the DNA fragments. This will be followed by clonally amplifying the libraries in preparation for sequencing.

The constructed library fragments then act as the template by which a new DNA fragment is synthesized. The sequencing process occurs through a cycle of washing, as well as flooding the fragments with the known nucleotides following a sequential order. The nucleotide sequence is then digitally recorded as the nucleotides incorporate into the growing DNA strand. The raw sequence obtained must undergo several analysis steps once the sequencing process is completed. The analysis processes include preprocessing the date in order to remove adapter sequences, as well as low-quality reads, mapping of the data to a reference genome, and analysis of the compiled sequence.