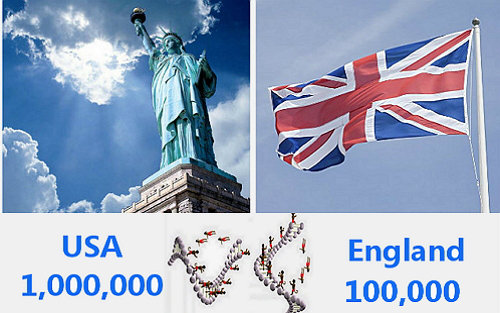 In 1996, A pair of Twins was born in California. It looks like they are not beloved by God and are a little different from normal children. They are diagnosed as cerebral congenital palsy in two and lived with medicine. When they are five, things got worse, they can even not walk normally and well-control their muscles. However, in 2003, a technology changed their life forever. That is genome sequencing. This help the doctors find the true pathogenesis and the twins were cured.

Such cases inspired scientists to have a deep exploration on genetic therapy. In fact, genome sequencing can help researchers find the cause of disease, but it is limited. That’s how the whole genome sequencing came into being. Since 1986 it was first proposed by Renato Dulbecco, human whole genome sequencing has become popular in medical research. Because of the improvement of technology, human whole genome sequencing is more affordable and effective. The prospect of whole genome sequencing in medical research is unpredictable.
Government need to take action. An idea was formed: Making a big project and speeding the development of whole genome sequencing. Iceland was the first to stand out and put the large-scale human genome sequencing project into effect. After that many countries start to connect the public health with whole genome sequencing. The Precision Medicine Initiative of United States encourage million citizens and even more to devote themselves to this project and have themselves sequenced. Other countries like Canada, Australia, Japan, Korea, Singapore, Thailand, China and so on.
But the most visible project may be the 100,000 Genomes Project of England. Until 2014, 28,000 bacteria and virus genomes have been sequenced. They plan to find 75,000 volunteers which include patients with rare disease and their relatives and patients with cancer. The government also found some partners for every step of this project, because this is complicated and tedious work.
Let’s see the what British government and those companies can get from this movement:It’s a win-win situation for both government and biotechnology companies. The government can save much money and energy. It’s no doubt that this project needs enough researchers and technical support. And luckily the companies have it. They don’t mind to share responsibility for government. All they need is reputation and the chance. Yes, this is a big chance. Chance is more important than anything. The human whole genome sequencing project will lead the whole industry to a new world. And it will greatly promote the development of medical research and technology. The first one enjoys the benefit.