Nobel Prize for Chemistry 2015: DNA Repair is the High Light

After Youyou Tu won the Nobel Prize in Physiology or Medicine, thousands of people focus on the chemistry prize. Who will take this honor?

Early the morning of Wednesday, the Royal Swedish Academy of Sciences announced the 2015 Nobel Prize went for three scientists: Tomas Lindahl, Paul Modrich and Aziz Sancar. They won this prize for the same reason: their contribution on mechanistic studies of DNA repair.

Tomas Lindahl, an emeritus scientist of Switzerland, has devoted himself to giving a better understanding on the cellular defence mechanisms to the damage of human genome. He discovered the base excision repair. The American scientists, Paul Modrich, showed the mismatch repair mechanism, and Aziz Sancar mapped nucleotide excision repair. Their discovery and studies is the basis of DNA repair studies.
DNA repair is a common action of cells. Our cells and genome can be damaged by some foreign elements and its own mutation. To maintain the normal function of human beings, our body needs consistent DNA repair. DNA repair is related to the normal function of life. It also related to aging and many disorders.
Here are some genetic diseases which related to DNA repair: 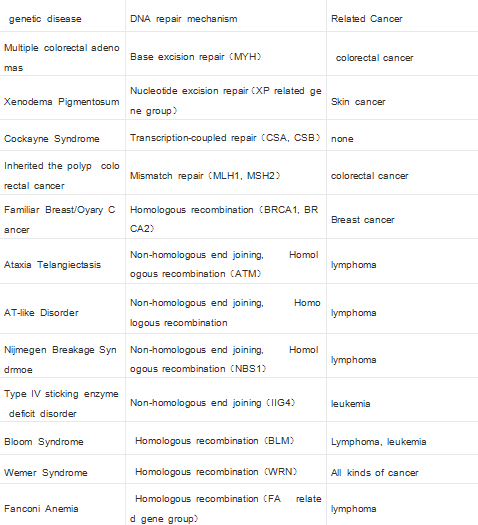 It’s no doubt that the Nobel Prize is the vane of all kinds of research. And it is also the catalyst for the industry. In 1980, Fred Sanger won the Nobel Prize for his discovery on methods of DNA Sequencing, which had led to the rapid development of genomic sequencing in decades. It’s not hard to foresee that everything related to DNA repair will be the super star in the next year, including our new favorite, CRISPR Cas9 technology. In the Citation Laureates of this year, researchers who have great contribution on this technology were presented. Although it’s regretful that the prize passed it by, this powerful technology will show its ability in more fields. In a word, that is a good news for biotechnology industry.